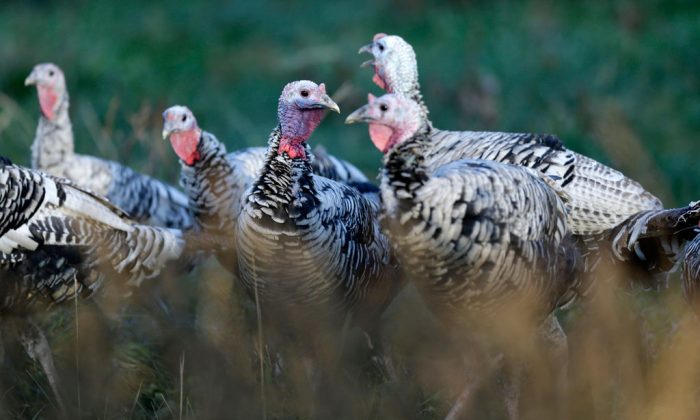 Narragansett turkeys roam a pasture near Trimble, Mo., Wednesday, Nov. 12, 2014. Turkey production is at its lowest level in nearly three decades and wholesale prices are at an all-time high, but Thanksgiving cooks probably won’t see much difference in the price they pay at the stores for their frozen birds. (AP Photo/Orlin Wagner)
Business

Turkey Production Down, Wholesale Prices Up

KANSAS CITY, Mo.—Turkey production is at its lowest level in nearly three decades and wholesale prices are at an all-time high, but Thanksgiving cooks probably won’t see much difference in the price they pay at the stores for their frozen birds.

This year’s anticipated stock is 235 million, according to the U.S. Department of Agriculture’s National Agricultural Statistics Service — the lowest since 1986, when U.S. farmers produced roughly 207 million birds.

While the estimated 2014 number doesn’t indicate a shortage of turkeys, which can remain in cold storage for a year or longer, it does reflect a pullback in recent years by poultry producers who were forced to reduce their flocks to remain afloat.

“Last year was a bloodbath. It was bad,” said John Zimmerman, a farmer in Northfield, Minnesota, who produces about 300,000 turkeys a year. He said scaled back his numbers in recent years because higher feed and transportation prices, among other things, cut into his bottom line. Even the price of soybean meal — which accounts for about 30 percent of turkey feed — is at a historical high, he said.

All areas of livestock production — poultry included — were drastically cut after the widespread 2012 drought in an attempt to stifle losses, says Corinne Alexander, a Purdue University agricultural economist. Plus, many farmers are using feed that they bought in the wake of the drought, which cost more than the current market price.

“What’s happening in the turkey sector is a mini-story of what is happening in other sectors, where the impact has been really dramatic,” Alexander said. “If you look at beef cattle, we have the smallest beef cattle herd since 1951, and prices for beef are up 17 percent this year.”

October wholesale prices for live turkeys jumped 12 percent from 2013, from 72 cents per pound to 81 cents, NASS commodities statistician Michael Klamm said. And frozen turkey wholesale priceswere expected to be between $1.12 and $1.16 per pound in the fourth quarter — up from $1.05 per pound at this time last year, the USDA said.

But consumers won’t necessarily see that reflected in the price of their Thanksgiving meal centerpiece.

“There’s really no correlation between what grocery store chains are paying and what they’re selling them at,” USDA agriculture economist David Harvey said.

Alexander doesn’t expect the paltry poultry numbers to stick around, because, compared with other livestock, it doesn’t take as long to rebuild the flock — about three to five months to raise aturkey to market size. Plus, this year’s record corn harvest will help the process, she said, as current projections indicate corn prices are about half of what they were in September 2012.

Zimmerman doubts corn prices will fall much more because of demand for ethanol and exports, and because farmers are rebuilding cattle and swine herds, too, cutting further into the nation’s abundant corn supply.

“It takes a while to recover, once you have a shock to the system, because premium stock gets liquidated and it takes time to raise it back up,” he said of the nation’s turkey supply. “There’s not going to be a quick change of price, but there should be a moderate change in the next six months.”