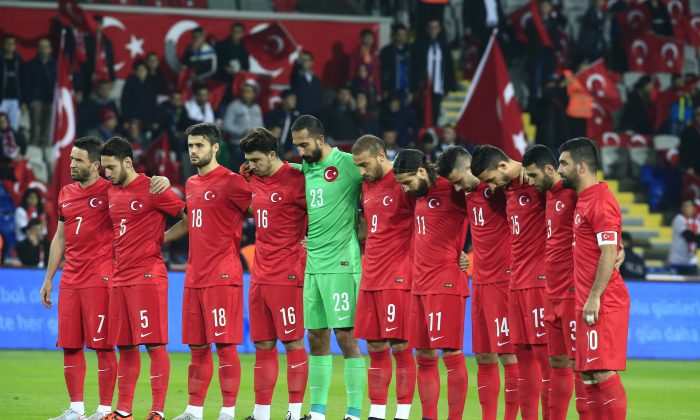 Turkey's players observe a minute of silence to honour the victims of the Paris attacks prior to an international friendly soccer match against Greece, in Istanbul, Tuesday Nov. 17, 2015. (AP Photo/Lefteris Pitarakis)
Europe

Turkey Asks ‘What Happened to Us’ Over Fans’ Disrespect

ANKARA, Turkey—On a night of European soccer matches between national teams, the scenes in London and Istanbul were a study in contrast. The British and French fans at London’s Wembley Stadium sang the French national anthem in solidarity over the Paris attacks, while in Istanbul hundreds of Turkish fans booed the Greek national anthem and disrupted a moment of silence for those killed in Paris.

The ugly incident illustrated what has been an ambivalent reaction to the attacks in Turkey — France’s NATO ally.

While soccer fans are in no way representative of society as a whole, the scenes showed that the Paris attacks did not draw the same outpouring of grief as elsewhere in the mainly Muslim country, where recent research showed 8 percent of the population had a favorable view of the Islamic State group. Analysts said the episode revealed the dim view some Turks have of European nations they accuse of insensitivity toward attacks by Kurdish rebels and other groups that have plagued Turkey over the past few decades.

During the outburst at Istanbul’s Basaksehir Fatih Terim Stadium on Tuesday night, team captain and Barcelona midfielder Arda tried fruitlessly to silence the crowd. And after the match ended in a 0-0 draw, Turkey’s national team manager was furious.

“What has happened to us?” Fatih Terim said at a post-match news conference. “As we hold a minute of silence for the dead, can’t we show patience even for a minute?”

The incident unfolded as the prime ministers of Turkey and Greece watched together from the stands as part of efforts to overcome historically strained ties — adding further embarrassment.

It drew strong criticism from Turkish President Recep Tayyip Erdogan, who appealed for soul-searching: “This is unacceptable,” he said. “We are not a nation that cannot show respect to the anthem of another country. This is something we have to solve.”

But Erdogan only mentioned the disruption of the national anthem — not the minute of silence — and pinned the blame on “a few hundred irresponsible people.” Other officials condemned the uproar during the moment of silence, which included nationalist chants and scattered calls of “Allahu Akbar,” or “God is great.” Officials have scrambled to avoid a repeat in future games.

“We do not look positively upon the whistling protest or the protest with words that disrupt the minute of silence,” said Omer Celik, the spokesman for the ruling Justice and Development Party.

The act of disrespect to the Paris victims comes amid a revival in Turkey’s ties with European countries, as the EU seeks Turkey’s help in stemming the influx of refugees into the continent. The bloc is offering Turkey cash incentives and progress on its EU membership in exchange for doing more to tackle the crisis.

Turkey has officially expressed its solidarity and grief for the victims. In the immediate aftermath, Erdogan hosted world leaders for a summit of the Group of 20 largest economies, which was dominated by discussions on how to respond to the attacks.

During the moment of silence, the nationalist chant — “Martyrs don’t die. The homeland will never be divided” — reverberated loudest. The slogan is chanted to denounce the rebels of the Kurdistan Workers’ Party, or PKK, which has waged a three-decade long war for autonomy for Kurds in southeast Turkey. Tens of thousands of people have died in the violence and the group is considered a terrorist organization by Turkey and its allies. The fighting flared anew in July, killing hundreds of people and derailing a fragile peace process with the PKK.

Many in Turkey believe European countries, including France, have supported the PKK out of sympathy for Kurds and have remained indifferent to violence by the group.

“This is the reflection of the logic: They don’t show us the same sensitivity, why should we show them that sensitivity?” said sociologist and columnist Ahmet Talimciler, in comments published in the Hurriyet newspaper.

A similar minute of silence for the 102 victims of a bomb attack in the capital Ankara was also disrupted by fans last month during an international game against Iceland, in the conservative and religious city of Konya. The attack had targeted Kurdish and leftist activists protesting the government, believed by some conservative Turks to have been PKK supporters.

Similar hard-line fervor may have fed the outburst at Tuesday’s match, some commentators said.

“I believe that some reacted this way because they regard those killed in Paris as worthless. They are infidels or foreigners,” wrote Tanil Bora, an expert on Turkish nationalism, in Hurriyet. “There are many conservative Muslims who felt grief for the Paris massacre … but it’s the ugly voices that come out the loudest.”