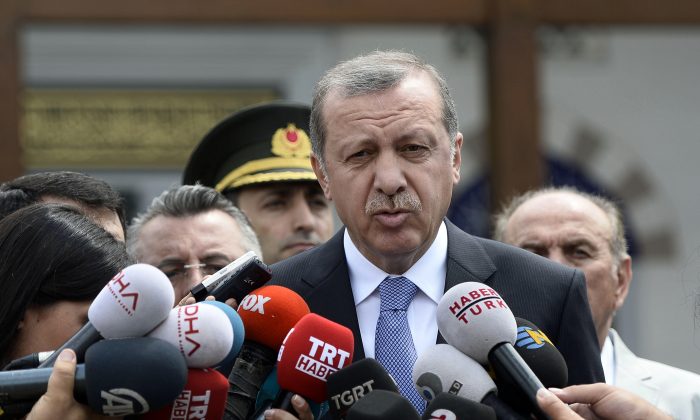 Turkish President Recep Tayyip Erdogan speaks to the media in front of a mosque in Istanbul, Turkey, on July 24, 2015. In a major tactical shift, Turkish warplanes struck Islamic State targets across the border in Syria on July 24, Turkish officials announced—a move that came a day after ISIS militants fired at a Turkish military outpost, killing a soldier. In a related, long-awaited development, Erdogan confirmed that Turkey had agreed to let the United States use a key base in southern Turkey for military operations against the militants “within a certain framework.” (Depo Photos/AP)
Opinion

Turkey and the Middle East Cauldron

Turkey has long been the proverbial elephant in the Middle East annex. Ever since the rise of President Recep Erdogan, the country’s role has been consistently ambiguous.

After four years of observing the boiling cauldron of Syria, Iraq, Islamic State in Iraq and Syria (ISIS), Iran, and multiple variants of “rebels” of every local religious/ethnic/cultural variant, Erdogan has apparently decided on a course of interventional action. It is carefully designed to maximize Turkish interests.

After four years of observing the boiling cauldron of the Mideast, Turkey’s leader Erdogan has apparently decided on a course of interventional action … carefully designed to maximize Turkish interests.

There is little question that the Turkish armed forces, which are the strongest Islamic-Muslim military establishment in the region, have the capability to destroy the Syrian military. The Turkish Armed Forces collectively rank as the second largest standing military force in NATO, after the U.S. Armed Forces.

According to the International Institute for Strategic Studies in 2014, the Turkish Air Force has an active strength of 60,000 military personnel and operates approximately 668 manned aircraft. Its over 200 F-16s are clearly able to deliver effective combat strikes.

The July 25 decision by Erdogan to engage ISIS, if not a game changer, is at least a game modifier.

Working within NATO parameters and in close association with U.S. military personnel since Ankara’s accession to NATO in 1952, Turkish combat forces have a legendary reputation for tough military effectiveness. Although Syrian combat forces remained loyal to Assad, there is little doubt that Ankara could have seized military control of Syria.

So the July 25 decision by Erdogan to engage ISIS, if not a game changer, is at least a game modifier.

Although attempting to sort out winners and losers in this exercise is akin to sorting gray cats in a basement without light, there are some judgments that can be made.

Winners: First, the United States, which now is able to use its long-standing airbase at Incirlik, has moved its potential for aircraft and drone attacks on ISIS/Daesh targets much closer to the battle ground. Nor are we required to hit Syrian government/army targets as Erdogan long demanded.

Second, Turkey now is able to assert the leverage over other regional actors that it declined to do earlier. It is creating a “cordon sanitaire” along the borders that should reduce ISIS incursions (while simultaneously protecting non-Kurdish anti-Assad rebels).

Additionally, Ankara appears to have gotten the United States to implicitly look the other way with regard to Turkish strikes against anti-Ankara Kurds. Since virtually all Kurds are anti-Ankara, that could lead to some fatalities among Kurds who, right now, are effectively fighting ISIS. And finally there are the “unknowns.” Just how much in the form of military equipment, economic support, and so on, has the U.S. government promised Ankara as one element of the extended negotiations?

Third, Iraq has something equivalent to an additional ally—at least so far as making it harder for ISIS to pass recruits through the previously porous Turkish border with Syria. And for those dubious about Iranian power in Iraq, Turkey is a potential counterweight.

Fourth, Assad managed to avoid direct military assaults from a new attacker. Syria continues to struggle against both ordinary anti-regime rebels and ISIS, but retains key military and financial support from Hezbollah and Iran.

Losers: First and foremost, ISIS militants. There is now a powerful new enemy hitting them and restricting their field of action.

Secondly, the Kurds continue to be “odd man out.” They are a people without a country vigorously attempting to carve a country from Syria, Iraq, and Turkey. Their high-level combat effectiveness may now be less important with Turkish military forces in action.

Third, Hezbollah and Iran now must manage relations with a “big dog” that doesn’t share their objective of sustaining Assad.

Perhaps we are now seeing the “end of the beginning” for defeating ISIS. The key remains with U.S. efforts to create an Iraqi military that is more stalwart than wet cardboard.