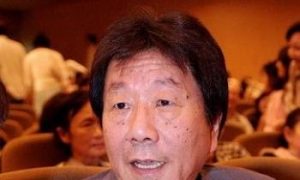 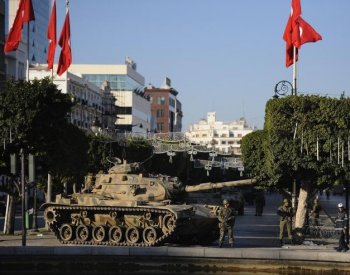 Soldiers stand guard near a tank in Tunis on January 16, 2011. Heavy gunfire was heard in the centre of Tunisian capital on Sunday with security forces exchanging fire with people inside buildings. (Fred Dufour/Getty Images)
Africa

By Epoch Times Staff
Print
Tunisia’s Interim president said Sunday that a new coalition government will be announced Monday. The announcement comes as authorities scramble to hold the country together after President Zine El Abidine Ben Ali fled Friday in the wake of escalating public protests against his autocratic rule.

Prime Minister Mohamed Ghannouchi said the new government "will open a new page in the history of Tunisia," according to Reuters.

What began a month ago as public protests over unemployment intensified into a public uprising against Ben Ali’s rule. People, upset over a lack of freedom of speech and lies told by Ben Ali during his 23 years as president, continued to protest in spite of his promise on Thursday to resign in 2014.

The situation in the capital Tunis has been volatile since the president’s flight with clashes between security personnel loyal to Ben Ali and Tunsia special forces Sunday, and looting and chaos on the streets.

Mebazaa asked Ghannouchi to help form a government of national unity, and authorities said a presidential election will be held in two months according to Reuters. After negotiations Sunday in Tunis, three opposition party candidates were given positions in the interim government as well as two officials from Ben Ali’s government; a foreign minister and a recently appointed interior minister, will continue to their same jobs in the interim government, according to Reuters.

During Ben Ali’s rule, officially recognized opposition parties were restricted from executing a proper opposition, and a number of parties, such as the Islamic party, were banned altogether. According to the African Press Agency, the acceptability of the temporary government is being questioned, and people’s faith in a peaceful resolution is not strong.

Numerous incidents of violence have been attributed to presidential security forces over the weekend. Loyalists reportedly drove through the streets firing randomly, looted shops and homes, and set buildings on fire. Tunisian special forces with tanks were stationed near public buildings around Tunis.

Ben Ali's security chief Ali Seriati was arrested for plotting instability Sunday and an estimated 1,000 presidential guards clashed with the army near the presidential palace in Carthage. A columnist for the National and Emarat Alyoum, Sultan Al Qassemi, twittered that the army was victorious at end of the clash.

Ben Ali is in Saudi Arabia after having been refused asylum in Malta and France.

Secretary of State Hillary Clinton called Tunisian Foreign Minister Kamel Morjane, Sunday to express U.S. support for Tunisia as the people “and their government go through a period of significant transition.”