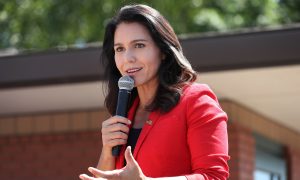 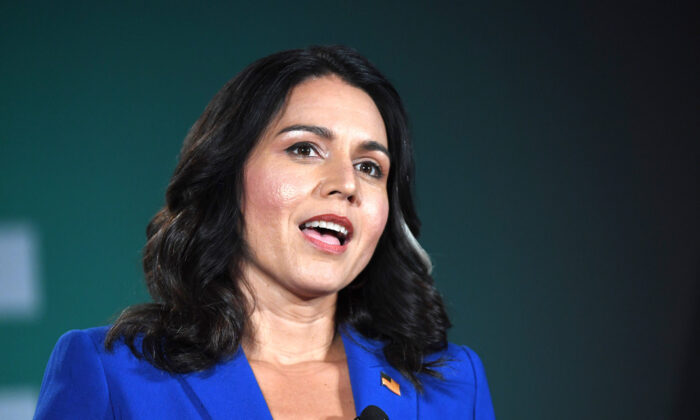 Democratic presidential candidate Rep. Tulsi Gabbard (D-Hawaii) said in a recent interview on “Fox & Friends” that impeaching the president would be “terribly divisive” for the United States.

“I believe that impeachment at this juncture would be terribly divisive for the country at a time when we are already extremely divided,” Gabbard told host Brian Kilmeade on Sept. 24. “The hyperpartisanship is one of the main things that is driving our country apart.”

“I think it’s important to beat Donald Trump, that’s why I’m running for president,” she added. “But I think it’s the American people who need to make their voices heard making that decision.”

Gabbard’s comments come ahead of the House’s announcement later on Sept. 24 that they have formally launched an impeachment inquiry into President Trump, with House Speaker Nancy Pelosi (D-Calif.) alleging that Trump “seriously violated the Constitution.”

“This week, the president has admitted to asking the president of Ukraine to take actions which would benefit him politically,” Pelosi said. She alleged that Trump’s presidency “revealed dishonorable facts of the president’s betrayal of his oath of office, betrayal of national security, and betrayal of the integrity of our elections.”

Democrats’ earlier calls to impeach Trump came to a standstill after former special counsel Robert Mueller was unable to back up claims of Russian collusion.

The situation sparking the latest calls to impeach Trump started last week, when an alleged whistleblower leaked the allegation that Trump improperly tried pressuring Ukrainian President Volodymyr Zelensky to investigate former Vice President Joe Biden and Biden’s son Hunter Biden during a phone call in July. This was seen by some as new grounds for impeachment.

The Ukrainian government has denied the reports that Trump engaged in improper conduct during the call.

Media outlets have hyped the so-called whistleblower complaint against Trump, which was filed to the intelligence community inspector general in early August. But, according to reports, the person who wanted to report Trump’s allegedly improper behavior during the call didn’t have direct knowledge of what took place during the discussion.

Around the same time of Pelosi’s impeachment inquiry announcement, Senate Minority Leader Chuck Schumer posted a Twitter message Sept. 24 saying that the Senate unanimously passed a resolution calling for the whistleblower complaint to be handed over to Congress.

Meanwhile, Trump said that the full, unredacted transcript of the Ukraine call will be released on Sept. 25.

In 2018 Joe Biden bragged about pressuring Ukraine to fire a prosecutor, Viktor Shokin, two years previously. Biden did not tell his audience at the time that Shokin was investigating Burisma, an energy company where his son Hunter Biden worked.

Trump and his lawyer Rudy Giuliani, the former New York City mayor, have repeatedly urged media outlets to probe the situation involving the Bidens, and multiple current and former Ukrainian officials have said they have evidence the Democratic National Committee interfered in the 2016 presidential election.

Trump posted on Twitter on Sept. 24 a compilation video of Democratic lawmakers saying that they support the impeachment of the president.

For impeachment to pass the House, 218 votes would be needed. Politico reported that 207 Democrats support impeachment or an impeachment inquiry as of early Sept. 24.

If 218 votes are reached in the House of Representatives alleging the president is guilty of “treason, bribery, or other high crimes and misdemeanors,” the Senate would then conduct an impeachment hearing on the charges. A two-thirds majority vote of the 100-member Senate, currently under control of Republicans, would then be needed to convict and remove the president from office.