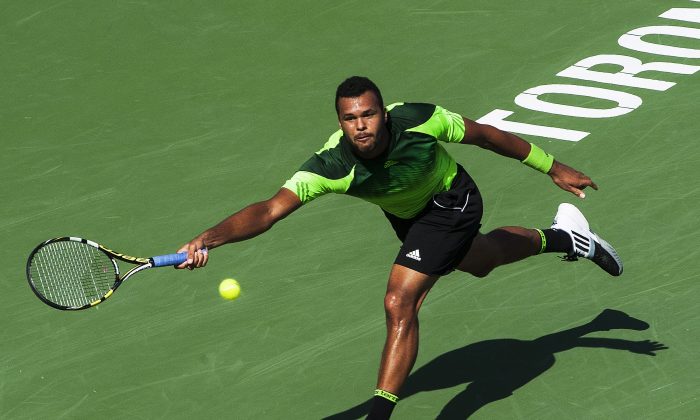 TORONTO—Jo-Wilfried Tsonga finished an incredible week of tennis to win the Rogers Cup, knocking off Roger Federer 7–5, 7–6 (7–3) in the final at Rexall Centre on Sunday.

Tsonga had been the hottest player in the tournament entering the final with three straight wins over top-10 players. There can be no doubt that he has the talent that belongs in the top 10. And with the win, he got back into the top 10 for the first time in five months, beating a fourth top 10 player this week in Federer.

Tsonga has now beaten Federer three times in Canada and improved his record against the Swiss master to 5–11.

“[It’s] just one of the best moments in my life,” Tsonga told CBC in an on-court interview right after the match. “[I’m] really happy…when you believe in something, it can happen.”

In matches between the big servers, it comes down to who plays the big points better. Serving 5–6 in the first set, Federer hit a backhand wide—he challenged unsuccessfully—giving Tsonga the first break point of the match. On break point, a Federer forehand flew long, and in the blink of an eye, the first set went to Tsonga.

One break point was all it took for the first set.

It wasn’t a great set for Federer, committing 15 unforced errors to only 8 winners, while Tsonga had 12 winners and 10 unforced errors. And on a couple of game points, Tsonga came up with big aces to close out the game, showing how well he was playing the big points.

Federer was not at his best with a forehand that could be brilliant one moment and erratic the next. Having become used to playing at night and now playing the final in bright sunshine and very warm temperatures, Federer was taking some time to adjust. He also had fewer hours to rest after his semifinal victory.

“It was like a new tournament today for me,” Federer said in his postmatch press conference, but he was not making excuses. “I think he [Tsonga] played really solid.”

“I just didn’t feel like I was playing good enough to win today. Just really frustrating the way I felt out there.”

Tsonga recognized the change in conditions for Federer and admitted it was an “advantage” for him.

He was taking the crowd out of the game. The packed Rexall Centre was eager to cheer on the sentimental favorite Federer, but they could only applaud Tsonga’s play.

The eighth game of the second set was a battle with Federer fighting off double break point and then giving Tsonga a couple of more chances. He served brilliantly one moment and then committed unforced errors, dumping a volley into the net or hitting his forehand wide.

Federer managed to force a tiebreak in the second set. While owning a 6–4 advantage in tiebreaks coming into the final, he hadn’t beaten Tsonga in a tiebreak in Canada (losing all three).

Federer again committed some uncharacteristic errors in the tiebreak and Tsonga stayed steady as ever. He never faced a break point and hit 11 aces to Federer’s 7.

“I was hoping to sneak in a set and then maybe he would get a bit nervous or play a bad game,” Federer said. “I just couldn’t create enough opportunities so I think he deserved to win at the end of the day.”

Tsonga’s strategy was pretty simple and typical against a top player. He summed it up: “To be focused on my serve, keep my serve, make him play one more shot all the time.”

The Rogers Cup, since 2003, has been dominated by the “Big 4? of men’s tennis—Federer, Rafael Nadal, Novak Djokovic, and Andy Murray who have been the only winners. But Tsonga’s breakthrough was a big change. He roared through the competition like few have rolled through any tournament.

For both players, the Rogers Cup marks the start of their hard court season as they both hadn’t played since Wimbledon. Their U.S. open preparations continue in Cincinnati next week.

And Federer reflected on Tsonga’s accomplishment and his chances at winning a major.

“He’s been in semis and finals before. And then he’s won a couple of [Masters] 1000s now. Especially when his confidence is high, he’s a big confidence player,” Federer said. “He can beat top 10 guys.”

For Tsonga, it’s all about his belief, having come back from serious knee injuries in the past.

“To achieve something, you have to believe in it. [It’s] just an achievement today for me.”