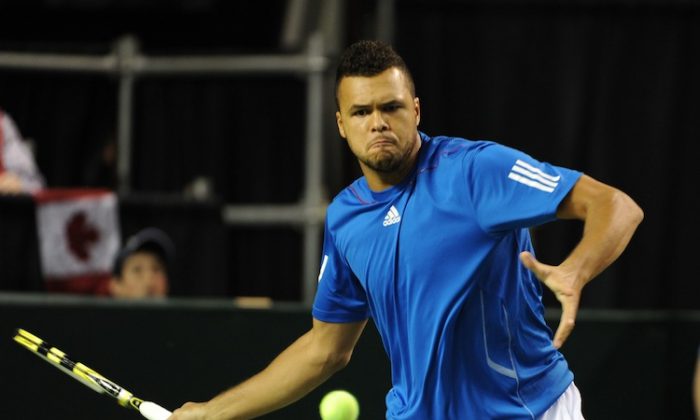 Jo-Wilfried Tsonga was the hero, winning his two singles matches as France beat Canada in Davis Cup action 4–1 this past weekend. Tsonga won the crucial fourth match over Canada’s Frank Dancevic, a late substitution for the injured Milos Raonic, 6–4, 6–4, 6–1. The win gave France an insurmountable 3–1 lead.

“It was not easy for me because I was ready to play Milos [Raonic],” said Tsonga in an on-court interview with Sportsnet after beating Dancevic.

“I’m just happy to win today for France,” said Tsonga. “He [Dancevic] took his chances. It was not easy with the atmosphere today.”

The Davis Cup atmosphere is the most raucous in tennis as fans cheer as they would at a soccer match for their country.

“I was happy with my play today,” said Dancevic. “I had nothing to lose. I was the underdog going in. The crowd got me really into it.”

“He [Tsonga] played the big points well today. It was an unbelievable atmosphere out there.”

Canada joined the big boys of Davis Cup tennis—the World Group (for the top 16 nations)—when they took on France in Vancouver at Thunderbird Sports Centre.

The powerhouse French team, ranked fourth in the world, lost in the 2010 final and won it all in 2001. The average rank of the three players who took on Canada in meaningful matches—Tsonga, Julien Benneteau, and Michael Llodra—was 29, matching the rank of Canada’s top player Raonic.

France also had very strong crowd support, decked out in blue shirts, and at times they needed it to pick themselves up. Despite being heavily favored to beat Canada, the hosts were no push-overs.

That set up a crucial doubles match, which Canada would need to win to avoid having to win both singles matches last Sunday. The 39-year-old veteran Daniel Nestor was then called into action given his phenomenal career as a doubles player, but France took the doubles match 7–6, 7–6, 6–3.

Canada’s hopes were supposed to be pinned on Raonic taking on Tsonga in the fourth rubber but early Sunday afternoon, it was announced that Canada’s top player would be unable to compete and 178th-ranked Dancevic would have to step in.

Dancevic put forth a strong effort telling Sportsnet, “I’m ready to go, if anything happens. You gotta be ready to play at any time [in Davis Cup].”

In an interview during the Dancevic–Tsonga match, Raonic explained that he had a “minor pain that elevated across the last two days of play” and that he’d have it looked at in San Jose on Monday.

“I don’t think I would’ve been much use,” said Raonic.

France will take on the United States in the quarterfinals in April.

As for Canada, they will need to win a playoff in September to retain their spot in the World Group. It will be critical to have a healthy Raonic for that matchup. Nevertheless, signs of encouragement are there as Pospisil got some much needed experience and Dancevic came back from out of the wilderness to put up a good fight against the formidable Tsonga.