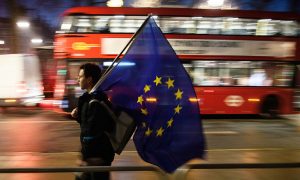 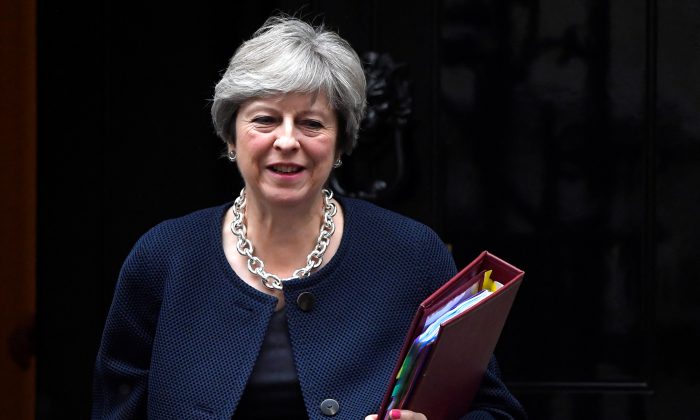 Trying to Unblock Brexit Impasse, May to Make Offer on EU Citizens

BRUSSELS—British Prime Minister Theresa May, seeking to unblock stalled talks on Brexit, promised on Thursday to make it as easy as possible for European Union citizens living in Britain to stay after it leaves the bloc.

Weakened by losing her Conservative Party’s majority in a June election and failing to rally support at an ill-fated party conference, May had initially hoped she would regain her footing by persuading EU leaders at a two-day summit starting on Thursday to let Brexit talks move beyond matters of the divorce.

But EU leaders have ruled that out, saying London must agree to pay more as part of an exit settlement than May has said is acceptable. So, changing the focus, she will offer greater concessions for those EU citizens anxious about their rights in Britain post-Brexit.

This is unlikely to alter the outcome of the Brussels summit. Continental leaders have assumed for weeks that a deal can be struck on this issue. But it indicates British officials are pursuing a new course—adopting a softer approach to try to win over the bloc’s negotiators, if not all its governments.

May will say: “We are in touching distance of agreement” of securing the rights of the around 3 million people from other EU countries in Britain.

“I couldn’t be clearer: EU citizens living lawfully in the UK today will be able to stay,” she wrote on her Facebook page, adding she would set up a group of those affected and experts to make sure the process is smooth.

“I know both sides will consider each other’s proposals for finalizing the agreement with an open mind. And with flexibility and creativity on both sides, I am confident that we can conclude discussions on citizens’ rights in the coming weeks.”

Offering concessions, May will say that EU citizens settling in Britain will no longer need to have Comprehensive Sickness Insurance, as they currently require under EU rules.

A senior government official said the aim was to get clear commitments to “swift progress on both sides for an ambitious plan to be set out for what should be achieved in the weeks ahead and particularly a shared urgency in … reaching an agreement on citizens’ rights.”

EU negotiators have, however, so far been wary of British offers that London refuses to back up by giving people a right to turn to the EU court to enforce if British courts do not.

The offer is a change of tack by the British leader, who is under increasing pressure from Conservative Brexit campaigners to pull out of the talks which hit deadlock last week.

EU leaders are expected to say at the summit the talks have not yet made sufficient progress for them to open the post-Brexit trade negotiations that May wants.

In an open letter to May on Thursday, pro-Brexit politicians and business people said that unless the EU agreed to trade talks, Britain should signal it was ready to be subject to World Trade Organization (WTO) rules from March 30, 2019, when Brexit takes effect.

Meanwhile, the leader of Britain’s main opposition Labour Party, Jeremy Corbyn, arrived in Brussels on Thursday to meet EU lawmakers to try to break “the Brexit logjam” created by what he called government “bungling”.

The EU leaders are expected to make a “gesture” and to recognize concessions May offered in a speech in Italy last month by telling EU staff to prepare for talks on a transition period needed to ease uncertainty for business.

“We have to work really hard between October and December to finalize this so-called first phase and to start negotiating on our future relationship with the UK,” Donald Tusk, the chairman of EU leaders, said on Wednesday.

Some EU officials said Britain could unlock the talks by putting a higher figure for the divorce bill on the desk of chief negotiator Michel Barnier, something May says she cannot do until she has an understanding of the shape of future ties.

If May offers more than the around 20 billion euros she outlined in her Florence speech, she risks angering some in her party, which, according to two sources, is getting ready to line up a successor.

A senior British government official said she would not change position on the financial settlement and instead would focus on the deal on EU citizen rights—an issue that the EU says must be resolved before the talks can move on.

The official said the change of focus was not to try to save face at the summit, at which she will present her case over a dinner on Thursday. She will then be excluded from the other 27 EU members’ discussions on Friday about Britain’s planned departure from the wealthy bloc.