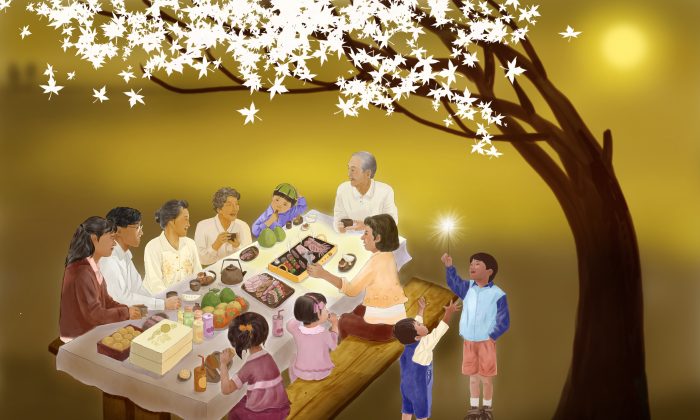 With Mid-Autumn Festival approaching, overseas Chinese are sending their festival greetings to Mr. Li Hongzhi, the founder of Falun Gong, to express their appreciation and gratitude for Mr. Li and Faun Gong practitioners.

Every year at major Chinese festivals, Chinese people from China and overseas send their best wishes to Mr. Li via digital means, thanking him for bringing great moral values and health benefits to people around the world.

Falun Gong, also known as Falun Dafa, is a spiritual practice for self-improvement based on universal values of truthfulness, compassion, and forbearance. It has five slow-moving and gentle exercises that bring significant physical benefits to practitioners of the practice.

Mid-Autumn Festival, also known as Moon Festival, is a major traditional Chinese festival celebrated by Chinese people worldwide for good harvests and family gatherings. It falls on the fifteenth day of the eighth month in the lunar calendar, which corresponds to Sept. 10 of the Gregorian calendar this year.

The quitting the CCP movement began in 2004 and was sparked by the release of The Epoch Times book “Nine Commentaries on the Communist Party,” which details the history of the CCP and its crimes against the Chinese people.

As of August 2022, over 400 million Chinese people had quit the CCP and its affiliated organizations the Youth League and the Young Pioneers, hence the Chinese name “san tui,” meaning “three withdrawals.”

“Master” is a title of reverence for a teacher in traditional Chinese culture.

He said that anyone with a conscience and a sense of justice will accept the universal values of truthfulness, compassion, and forbearance—the core teachings of Falun Gong.

“Truthfulness, compassion, and forbearance transcend nations and cultures and have great positive significance for the progress and integration of world civilization,” Yang said.

Yang speaks very highly of the perseverance of Falun Gong practitioners who face persecution in China and expose the evil nature of the CCP.

He wished all Falun Gong practitioners a happy holiday.

“Stand up to your beliefs and protect yourself while maintaining your faith,” Yang expressed his support of Falun Gong practitioners in China on the eve of the Moon Festival.

Since 1999, the CCP has banned the belief of Falun Gong in China, as it has banned other orthodox beliefs, without any legal basis. Falun Gong practitioners have since been telling people about the brutal persecution targeting Falun Gong through word of mouth, handing out pamphlets, pasting posters, and mailing letters to relevant government departments and staffers.

‘Master Li is the Greatest Chinese of Today’

As a medical professional, Zhou has been observing Falun Gong since the spiritual practice was made public in 1992 in China, especially the health benefits of the practice. She told The Epoch Times on Aug. 28 that she appreciates Falun Gong’s moral teachings of truthfulness, compassion, and forbearance.

“Falun Gong is a great belief; it has been truly safeguarding and reviving Chinese culture both in the country and abroad after the CCP ruled China in 1949. I think Master Li has been the greatest Chinese of today,” Zhou told the publication on Aug. 28.

Zhou noted that Falun Gong’s values of truthfulness, compassion, and forbearance are incompatible with the CCP’s falsehoods, evil, and cruelty.

“Falun Gong is the group that has the deepest understanding of the CCP and is the earliest in the world that has awakened to the evil nature of the CCP,” Zhou said.

“The courage of Falun Gong practitioners is very admirable. The more kind and sincere people like them, the better, when China is still under the CCP’s atrocities,” Zhou added.

As a doctor, Zhou said that she was aware of the persecution of Falun Gong by the CCP and that the CCP-backed live organ harvesting of Falun Gong practitioners does exist in China.

According to Zhou, Chinese hospitals expressly state that they will not accept organs from any private or non-governmental source that are not approved by health authorities. “The only channel is the official channel, and we go to the official channels, such as the provincial government,  which give us approval of organ sources,” Zhou told The Epoch Times.

The hospital in Guangzhou she used to work for has an organ transplant center, which has been among the busiest departments, having over a hundred transplant operations every month, recalled Zhou.

The CCP began its massive suppression campaign against Falun Gong practitioners in 1999 due to its popularity among Chinese people. Official data reported that 70 million to 100 million Chinese were practicing Falun Gong before the persecution, outnumbering the CCP’s party members.

CCP leader at the time, Jiang Zemin, personally ordered to “eliminate Falun Gong within three months,” and he had a special organization—the 610 Office—set up for the sole purpose of persecuting Falun Gong practitioners. Falun Gong practitioners have suffered from abduction, detention, imprisonment, torture, and forced live organ harvesting by the CCP, which is still ongoing.

‘Falun Gong Practitioners Are the Hope of the Chinese Nation’

Zhu Chuanhe, once a billionaire in China, expresses his gratitude to Mr. Li Hongzhi and appreciation of Falun Gong practitioners for persistently exposing the CCP’s atrocities.

“Master Li spreads the universal values of truthfulness, compassion, and forbearance, which is the salvation of the Chinese nation,” Zhu said, “I sincerely wish Master Li a happy Moon festival and good health!”

Zhu is now living in Canada. He is from China’s eastern Shandong Province.

He used to be a successful businessman and had seven real estate companies with total assets of nearly one billion yuan ($143 million) in Jinan, a city of Shandong. However, he was framed by the communist regime that aimed to exploit his wealth, being imprisoned five times, according to Zhu in an interview with The Epoch Times on Aug. 26.

In 2009, he immigrated with his family and settled down in Vancouver, Canada.

“In harsh environments, Falun Gong practitioners still insist on telling people the truth and following the principles of truthfulness, compassion, and forbearance in their everyday life. This is very difficult, especially in China,” Zhu said.

‘The CCP’s Tyranny Will End Soon’

Yang Chong, one of the earliest initiators of the Southern Street Movement, expresses his best wishes to Mr. Li Hongzhi for a happy Moon Festival.

According to a 2013 article by China Change, a U.S.-based organization reporting on China’s human rights, the Southern Street Movement was initiated in 2010 by several grassroots activists seeking democracy in China. They held banners in the streets of China’s southern cities, including Guangzhou and Shenzhen, demanding general elections and the abolition of the one-party political system. Members of the movement were persecuted by the communist regime.

When speaking with the publication on Sept. 3, Yang said, “Falun Gong practitioners in China are subjected to the most severe persecution. They face all kinds of oppression by the CCP, and even face threats to their lives.”

Liang Yao contributed to the article.