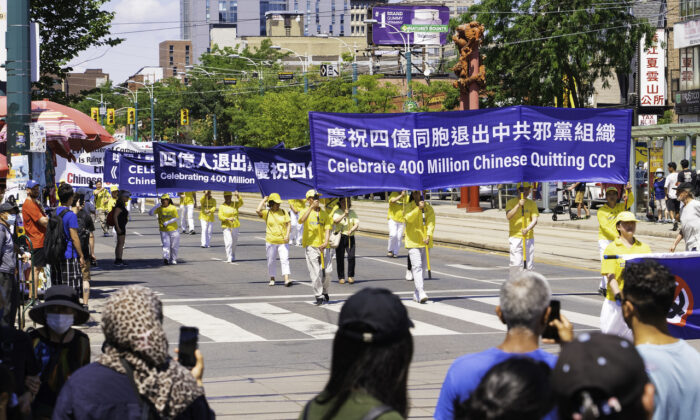 People watch as a parade to celebrate 400 million Chinese people quitting the Chinese Communist Party and its affiliated organizations makes its way through Chinatown in Toronto on Aug. 6, 2022. (Evan Ning/The Epoch Times)
Canada

Hundreds of people participated in a parade through Toronto’s Chinatown on Aug. 6 to celebrate the milestone of 400 million Chinese people having renounced their ties to the Chinese Communist Party (CCP) and its affiliated organizations.

“SanTui,” a Chinese phrase meaning “Three Withdrawals,” was seen emblazoned on banners as Falun Gong adherents and supporters marked the occasion in Toronto. Similar parades were held in Montreal and Calgary.

The Three Withdrawals, which refers to withdrawing from the CCP, the Communist Youth League, and the China Young Pioneers, aims to give the Chinese people a way to disassociate themselves from the CCP, which has long history of killing and deceit.

The movement began in 2004, sparked by the release of The Epoch Times book “Nine Commentaries on the Communist Party,” which details the history of the CCP and their crimes against the Chinese people.

On Aug. 3, the date the 400 million milestone was reached, Rong Yi, president of the U.S.-based Global Service Center for Quitting the Chinese Communist Party, commended the “400 million brave Chinese” who severed their ties to the communist regime.

“The Three Withdrawals is the largest grassroots movement in Chinese history. The truth it exposes helps awakened hundreds of thousands of Chinese people,” Yi said at a press conference in Flushing, New York City.

An estimated 80 million Chinese people have died of unnatural causes due to the CCP’s various political campaigns since it took power in 1949, Yi said. The more recent campaigns she pointed to include Tiananmen Square in 1989, the ongoing persecution of adherents of the spiritual practice Falun Gong, the imprisonment of millions of ethnic minorities in Xinjiang and Tibet, and the crackdown on democracy in Hong Kong.

“The most important mission for mankind is the disintegration of the CCP,” she said. “Only by ending the tyranny of the CCP can the Chinese people embrace freedom, peace, and prosperity.”

More events will be held in Canada throughout the month of August, including over 100 car parades that will take place in Toronto, Ottawa, Montreal, Winnipeg, Edmonton, Calgary, and Vancouver.

A spokesperson at the Toronto event told The Epoch Times that the number of people disassociating themselves from the CCP and its affiliated organizations continues to grow by an estimated 50,000 to 70,000 per day.

Mina Comtreras and her husband Wadelfoxelo, who are visiting Toronto from Pennsylvania to celebrate their wedding anniversary, stopped to watch the parade.

“[We learned] pretty much what the world knows that China is a communist country and a lot of things have to change,” Mina said.

“It’s really sad,” she added, upon hearing about the CCP’s persecution campaigns against the Chinese people.

Cathy Lin, a university teacher from China’s Shandong Province now living in Toronto, said the Chinese people are victims of the CCP’s propaganda campaigns, and the Three Withdrawals movement gives them a chance to take a step back and discern for themselves.

Lin joined the thousands of students who gathered on Tiananmen Square in Beijing in June 1989 to call for democracy. She didn’t witness the brutal massacre of the students, however, and says state propaganda led her to doubt there were any killings.

“I grew up under the influence of CCP’s propaganda, … and I had a blind faith in the Party,” she told The Epoch Times.

In 1995, Lin began practicing Falun Gong, known as Falun Dafa, a traditional Chinese practice that involves meditative exercises and moral teachings based on the tenets of “Truthfulness, Compassion, Forbearance.” Made public in 1992, the practice had 70 million to 100 million adherents in China by the late 1990s. Such popularity was perceived by the CCP as a threat to its authoritarian rule, and on July 20, 1999, the regime launched a far-reaching persecution campaign aimed at eradicating Falun Gong.

In October 2000, Lin was arrested when she went to Beijing’s National Petition Bureau to urge the government to end its persecution campaign and allow Falun Gong adherents to practise freely. She was sentenced to three years in prison in the following year. Her husband was also jailed several times.

“During those times, my kids would find that their parents were gone all of a sudden. Their grandparents took care of them, but they dared not ask where mom and dad were, because they didn’t want to make their grandparents sad,” Lin said.

“The CCP’s persecution of Falun Gong finally made me realize its evil nature,” she added. “And after all we’ve gone through, my family are really supportive of this movement to quit the CCP.”

Lin fled to Canada in 2013. She said the Three Withdrawals movement is also important for Chinese people living in Canada.

“The reason that we tirelessly clarify the truth to the Chinese people is to give those kind people, who are capable of critical thinking, a chance to disassociate from the CCP,” she said.

“The [movement’s] greatest purpose is to allow more people around the world understand the evil nature of the regime, and let them know that the regime is destroying the culture and corrupting the morality of the entire human society.”