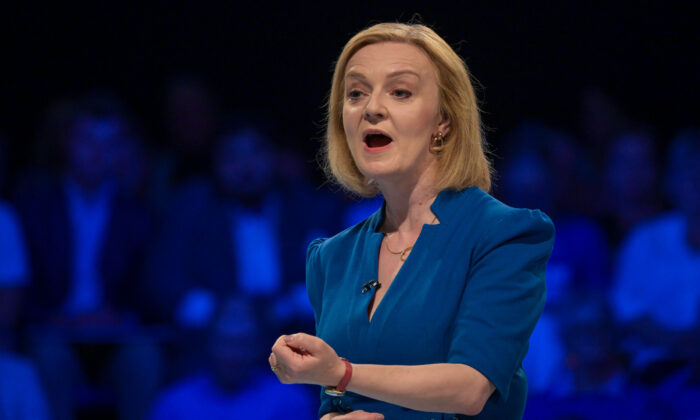 Truss: Scotland’s Nationalist Leader Is ‘Attention-Seeker’ and Should Be Ignored

At the leadership hustings on Aug. 1, the foreign secretary criticised Sturgeon’s push for another independence referendum.

But Sturgeon, who is also leader of the pro-independence Scottish National Party (SNP), announced last month she is planning to hold another independence referendum on Oct. 19, 2023.

Truss, who has ruled out another plebiscite if she becomes prime minister, took aim at the first minister.

“She’s an attention-seeker, that’s what she is,” Truss said.

“What we need to do is show the people of Scotland, Northern Ireland, and Wales what we are delivering for them and making sure that all of our government policies apply right across the United Kingdom,” she added.

Brexit opportunities minister Jacob Rees-Mogg, an ally of Truss, voiced support for her characterisation of the Scottish nationalist leader.

“I think she’s very often wrong, she’s always moaning, and we need to focus on how the Union benefits people,” he added.

He told the BBC, “People in Scotland, whatever their politics, will be absolutely horrified by the obnoxious remarks that Liz Truss has made.”

Scottish Health Secretary Humza Yousaf said Truss’s comments were “petty jibes,” but warned that the Tory leadership hopeful is carrying out an “all-out assault on devolution.”

‘Child of the Union’

Truss was born in England but spent time in the Scottish town of Paisley as a youngster. She has described herself as a “child of the Union” and has vowed to defend the United Kingdom.

In an interview with The Sunday Telegraph, Truss said that she will work to strengthen and defend the union.

If she succeeds Johnson as prime minister, she said, “there will be no second Scottish independence referendum on my watch.”