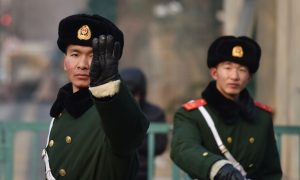 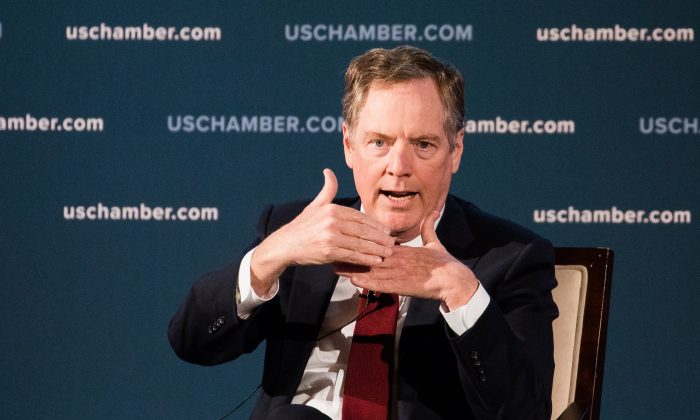 Trade Representative Robert Lighthizer participates at a discussion at the 9th China Business Conference at the U.S. Chamber of Commerce in Washington on May 1, 2018. (Samira Bouaou/The Epoch Times)
Politics

WASHINGTON—Speaking at the U.S. Chamber of Commerce ahead of his participation in the trade delegation to China, U.S. Trade Representative Robert Lighthizer said resolving the trade dispute with the Chinese communist regime would be a very challenging task.

“I am always hoping, but not always hopeful. So it is a big, big challenge,” he said on May 1 about the chances of reaching a deal during the meetings in China, starting May 3.

“Our list of things that are troubling is very long,” said Lighthizer.

U.S. companies have until May 22 to object to the proposed tariffs. And “after that, we legally can put them in place,” Lighthizer said.

Whether the United States will impose the proposed tariffs or not depends on the outcome of these negotiations, he added.

According to Lighthizer, the main focuses for the U.S. delegation during the negotiations will be to resolve the problem of intellectual property theft and to open up the Chinese market to U.S. companies in many areas, including agriculture, manufacturing, and financial services.

China has been taking about $300 billion a year of our intellectual property. That’s something we can’t live with.
— Stephen Moore, economist, The Heritage Foundation

Trump has recently taken measures to crack down on decadeslong “unfair trade practices” by China that have cost the U.S. economy hundreds of billions of dollars a year.

“China has been taking about $300 billion a year of our intellectual property. That’s something we can’t live with,” Stephen Moore, an economist at The Heritage Foundation and former economic adviser to Trump’s 2016 presidential campaign, told NTD, part of the Epoch Media Group.

Trump signed a presidential memorandum on March 22 directing the U.S. trade representative (USTR) and the Department of the Treasury to take action based on the findings of the Section 301 investigation launched in August 2017, which determined that the Chinese regime has been unfairly acquiring U.S. intellectual property for years.

According to a report by the USTR, Beijing is implementing laws, policies, and practices that harm American intellectual property rights, innovation, and technological development.

Through joint venture requirements and investment restrictions, the Chinese regime has been forcing technology and IP transfer from U.S. companies, and these actions have damaged American manufacturing, jobs, and innovation. They have also negatively affected U.S. exports and contributed to the trade deficit with China.

Trump also ordered the Treasury secretary to propose an action to stop unfair acquisitions or investments in the United States that are directed by China. Chinese companies that seek to invest in the United States are often believed to be acting at the direction of the regime.

“It would be madness to let state capitalism come in and buy our technology,” said Lighthizer. Foreign companies cannot acquire the crown jewels of Chinese technology, and hence the Chinese should have the same restrictions in the United States, he argued.

Previous administrations warned China but turned a blind eye to its unfair trade practices, according to Moore.

“This is a big moment for the relationship between the two countries,” he said. “It’s not that complicated for China to make some concessions, and I don’t think Trump is asking for the world.”