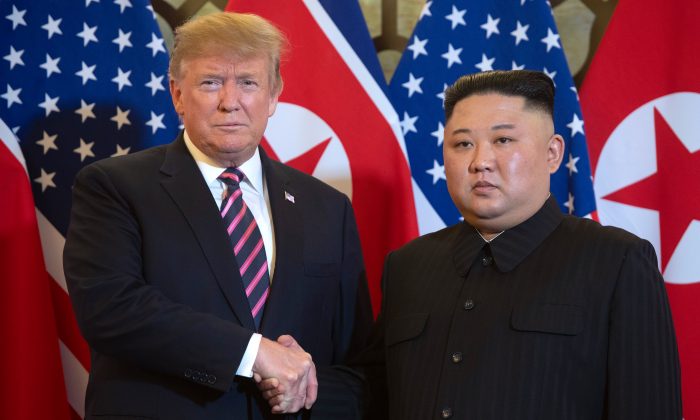 Trump’s Talks With North Korea Are Historic and Welcome

Zero. That’s how many times President Barack Obama met with the leader of North Korea.

Zero. That’s how many times President George W. Bush met with the head of North Korea.

In 2018, President Donald Trump became the first sitting United States president to meet with the leader of North Korea. And, while some of the president’s detractors have downplayed its significance, as a result of this administration, all nuclear and missile testing has stopped.

North Korea had six nuclear tests and 129 missile launches between 2006 and 2017. We’ve now had more than 400 consecutive days without either.

It’s a significant milestone and the framework through which actions on the Korean Peninsula should be seen, including the second meeting between Trump and North Korean leader Kim Jong Un, which occurred Feb. 27–28.

Even if the nuclear arsenal of North Korea hasn’t fully been dismantled, the world is much better off with high-level discussions taking place, rather than isolationism.

Critics of the recent meeting suggested that it was a failure, because no firm agreement was reached. But Trump had already laid out his red line, which was that anything short of a commitment to full denuclearization would be unacceptable.

The talks between the United States and North Korea are more than symbolic. They represent a pathway toward a brighter future of peace, economic opportunity, and human rights.

In the book “An American Spy Inside North Korea: U.S. Defense Intelligence Agency Operations Above the 38th Parallel,” author and American spy Theodore Schweitzer wrote about his experiences as the only real American spy to successfully penetrate the Democratic People’s Republic of Korea. As a clandestine operative for the Defense Intelligence Agency, he made it into the country 12 separate times and gained access to North Korean military officials.

Schweitzer’s intelligence reports made it to the White House and were included in the daily briefings of Obama. The gravity of the threat on the Korean Peninsula was a known quantity.

The horrors of a hot war on the Korean Peninsula are nearly unimaginable. In addition to the destruction of much of Seoul, military conflict would most certainly include a response from China, which has moved military assets close to its border with North Korea. Russia also has stated its objection to a U.S. military attack on North Korea.

Even if conflict involved only conventional weapons, it is estimated that more than a million people would die.

By leading discussions to denuclearize the Korean Peninsula, Trump is leading from the front and taking on a challenge that other leaders have all but ignored. There’s no more kicking the can down the road.

Despite the fact that the United States and North Korea have not yet reached a long-term agreement, the steps being taken to bring peace to the Korean Peninsula are historic and a welcome development for the global community.