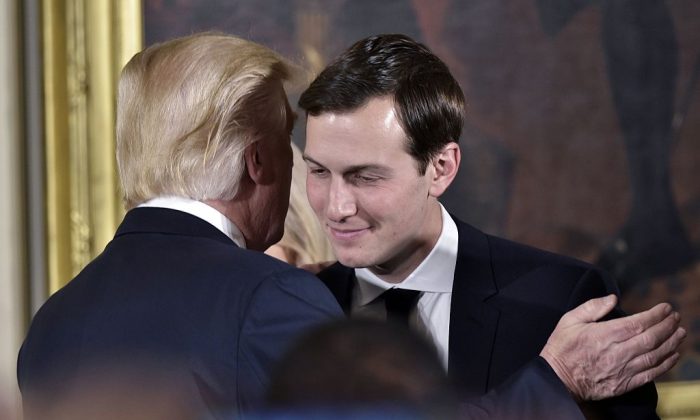 President Donald Trump (L) congratulates his son-in-law and senior advisor Jared Kushner after the swearing-in of senior staff in the East Room of the White House in Washington on Jan. 22, 2017. (MANDEL NGAN/AFP/Getty Images)
US

WASHINGTON—President Donald Trump on Monday is set to announce his son-in-law, Jared Kushner, will take on a White House role to oversee a broad effort to overhaul the federal government, The Washington Post reported, citing statements from both men.

Kushner, who is married to Trump’s daughter Ivanka Trump and currently serves as a senior adviser, will lead the newly formed White House Office of American Innovation with an eye on leveraging business ideas and potentially privatizing some government functions, the Post said.

“The government should be run like a great American company. Our hope is that we can achieve successes and efficiencies for our customers, who are the citizens,” Kushner told the Post in an interview.

Some of the areas he will focus on are veterans’ care, opioid addiction, technology and data infrastructure, workforce training and infrastructure, according to the report.

In a statement to the Post, Trump said: “I promised the American people I would produce results, and apply my ‘ahead of schedule, under budget’ mentality to the government.”

Representatives for the White House did not immediately reply to a request to confirm the report.

It also comes one week after Ivanka Trump received her own office in the White House along with access to classified information and a government-issued phone after aides earlier said she would not take on a role in her father’s White House.

According to the Post, aides said she will collaborate with Kushner‘s innovation office but will not have an official role.

Kushner has been a regular presence at his father-in-law’s side and was earlier cleared by the Justice Department to serve as a White House senior adviser even as Democrats raised concerns about his potential conflicts of interest.

He has already has been given a wide range of domestic and foreign policy responsibilities, including working toward a Middle East peace deal. He will continue to serve in his many roles even as he takes up the new duties, the Post reported.