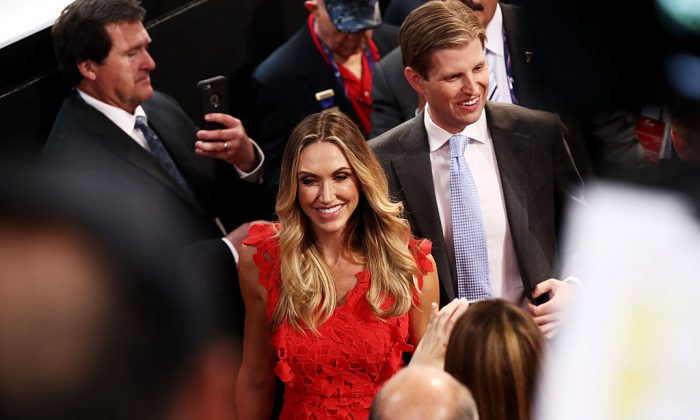 Eric Trump, along with his wife Lara Yunaska, takes part in the roll call in support of Republican presidential candidate Donald Trump on the second day of the Republican National Convention at the Quicken Loans Arena in Cleveland, OH., on July 19, 2016. (Win McNamee/Getty Images)
New York

NEW YORK—Eric Trump, the 33-year-old middle son of U.S. President Donald Trump, said on Monday that his wife Lara was expecting to give birth to their first child in September.

“We are adding a boy to #TeamTrump,” Trump wrote on Twitter. “It’s been an amazing year. We are blessed!”

.@LaraLeaTrump & I are excited to announce that we are adding a boy to #TeamTrump in September. It’s been an amazing year. We are blessed! pic.twitter.com/ENrhdxdziA

Eric Trump and his wife, formerly Lara Yunaska, married in November 2014 at Trump’s Mar-a-Lago resort in Palm Beach, Florida after dating for six years. Lara is also 33 years old, according to People magazine.

The baby boy, the president’s ninth grandchild, is due in September.

The couple told People they were still deciding on a name for their son.

“We really loved the name Charlie, but we’d already named our dog that, so it’s out,” Eric Trump said.

Eric is the third child born to Donald Trump and his first wife, the former model Ivana Trump.

A resident of New York City, Eric serves as a trustee of the Trump Organization along with his brother, Donald Trump Jr.

The president congratulated his son and daughter-in-law on the pregnancy following the announcement.

“Congratulations Eric & Lara. Very proud and happy for the two of you!,” he wrote on Twitter.

Congratulations Eric & Lara. Very proud and happy for the two of you! https://t.co/s0T3cTQc40