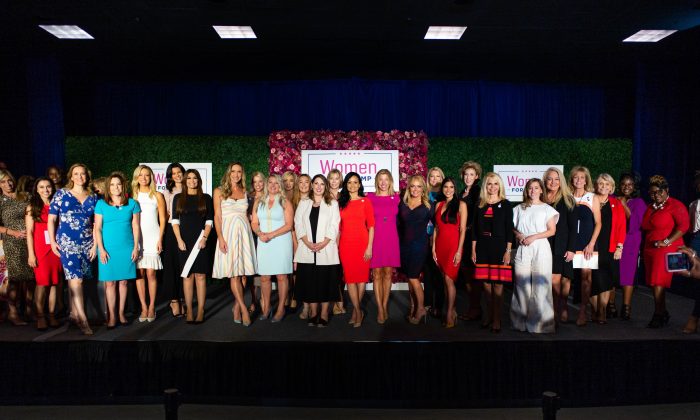 The packed room at the Valley Forge Casino Resort, located in the community of King of Prussia, Pennsylvania—in the suburbs of Philadelphia—pulsated with so much energy that the crowd would regularly stand up and cheer.

Among those speaking at the July 16 event included Lara Trump, senior adviser for the Trump 2020 campaign; Ronna McDaniel, chair of the Republican National Committee; Brad Parscale, Trump’s campaign manager; and others. Pro-Trump personalities Diamond and Silk were spotted sitting in the front row of the audience.

The number of women who support the president is continuing to grow, according to the speakers. Of those who donated to Trump’s 2020 campaign in the first quarter this year, more than 50 percent were women. In 2016, only 25 percent of donations came from women, Parscale said.

She said the average amount donated to Trump’s reelection this year has been $41.

McDaniel, the first to speak at the launch, listed Trump’s policies that she said have directly benefited women, including job creation.

Since 2017, of the about 6 million new jobs created, almost 3.1 million of the jobs have gone to women, McDaniel said.

Low unemployment records for women were also touted by the speakers.

“For women like the ones in this room, unemployment has been the lowest it’s been in 65 years,” Kimberly Guilfoyle, an attorney and girlfriend of Donald Trump Jr., said.

The “fake news” media and how they portray women as not supportive of the president was a much-discussed topic.

“You are groups on the ground, you are people disseminating the message,” Lara Trump told supporters. “Sometimes, when you watch the fake news, you’ve got to remind your friends out there to vote for Trump.”

She said then-candidate Trump asked her in 2016 to help him win the state of North Carolina. She recalled her efforts and how she and a number of other women toured the state in a bus.

They regularly saw support from the public while on the road, something she said wasn’t reflected in the news. She said media suppression continues today.

President Trump has placed a number of women in key positions in his administration, including counselor to the president Kellyanne Conway; CIA Director Gina Haspel; newly appointed press secretary Stephanie Grisham; Secretary of Education Betsy DeVos, and others.

“Fifty percent of those working in the 2020 campaign are women,” Parscale added.

Parscale said the campaign is using different polling techniques and artificial intelligence. He said the decision to host the event in Pennsylvania came from analyzing the data sets.

Another topic on everyone’s mind was socialism; nearly all spoke out against it.

At a June rally to kick off his reelection campaign, Trump said the choice in the upcoming election is between radical socialism embraced by the Democratic field and his agenda of freedom and the American dream.

Bernadette Repisky from Warminster Township, Pennsylvania, planned to attend as soon as she heard about the event. She said the day’s rollout was a counter to the fake news depiction that women don’t support Trump.

“You see this room today? Did you see what happened today? It’s just not true,” she told The Epoch Times. “The media tries so hard to push their own narrative. Women are going to come out for Trump.”