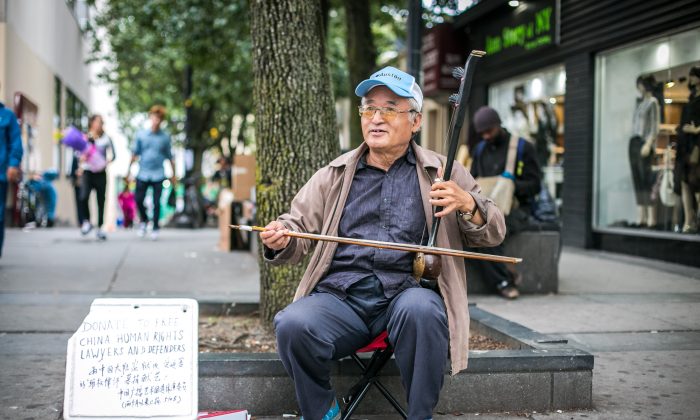 Trump’s Position on Human Rights in China a Mystery

United States President-elect Donald Trump has voiced sharp words for the Chinese regime when it comes to currency manipulation, a large trade deficit, and subsidizing exports, but he has said very little regarding human rights in China.

“It’s not something that Mr. Trump has spoken aggressively [about],” said Greg Autry, a USC Marshall School of Business assistant professor, in an interview with Epoch Times, on Monday, Nov. 21.

Autry co-authored a book titled “Death by China” in 2011 with Peter Navarro, a professor of economics and public policy at the University of California, Irvine. Navarro is now one of Trump’s advisors.

Despite his friendship with Navarro, Autry said he is not privy to inside information about Trump’s administration plans.

In their book, Autry and Navarro discuss China’s role in job losses experienced by the United States in recent decades.

“What we see is not necessarily a problem with China, but a problem with the current Chinese government, which operates unethically in its own environment and in the global economic sphere,” stressed Autry.

This ethics problem, according to Autry, has parallels in the human rights arena and manifests itself in how Chinese leaders treat their citizens.

“I don’t personally believe that the Chinese government’s interests lie in the best interest of the Chinese people,” Autry explained.

“If that were the case, there are a lot of other things they would do, like not executing more Chinese every year than the rest of the world combined.”

“I believe that their only interests lie in bringing home the economic goods for workers so that the Communist regime can stay in power and enrich a small group of people who run the system.”

‘Human Rights is Part of the DNA of America’: An Interview with Gary Locke on Hillary Clinton, China, and the 2016 Election

The United States has long lectured China on the importance of human rights, said Autry, but direct actions to address the issue have been very few.

Former Secretary of State Hillary Clinton said at the Asia Society in New York on Feb. 13, 2009, “Even with our differences, the United States will remain committed to pursuing a positive relationship with China.”

In July, Trump was interviewed by the New York Times during the Republican National Convention and asked whether he would address human rights with other countries. At the time, the US was experiencing ongoing protests over the shooting of men of color by police.

“I think right now, when it comes to civil liberties, our country has a lot of problems, and I think it’s very hard for us to get involved in other countries when we don’t know what we are doing and we can’t see straight in our own country,” Trump explained.

“When the world looks at how bad the United States is, and then we go and talk about civil liberties, I don’t think we’re a very good messenger.”

Autry said he believes it’s possible that human rights in China could improve in the future, if enough pressure was put on the Communist regime.

“We pretend that China is a normal, legitimately ruled country that doesn’t have a serious political problem going on,” said Autry.

“I would hope that we would see a [US] administration that could finally stand up forcibly to the Chinese regime and demand that, for instance, they implement rather than just talk about environmental regulations that protect the global and Chinese environment…We also need [China] to protect their workers the way we do in the United States.”