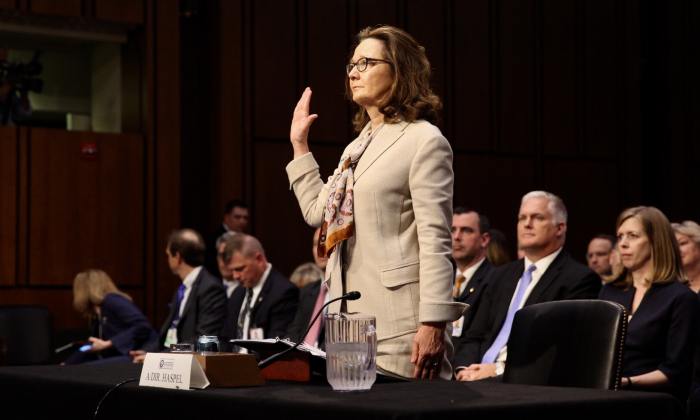 Gina Haspel, the nominee to lead the CIA, testifies before the Senate Intelligence Committee on May 9, 2018. (Samira Bouaou/Epoch Times)
Trump Administration

WASHINGTON—President Donald Trump’s nominee to head the CIA promised lawmakers on Wednesday, May 9, that she will never resume a program of harsh interrogations that has been the major issue complicating her confirmation.

“Having served in that tumultuous time, I can offer you my personal commitment, clearly and without reservation, that under my leadership, on my watch, CIA will not restart such a detention and interrogation program,” Haspel said in her opening statement before the Senate Intelligence Committee on Wednesday morning.

Public questioning of Haspel on issues such as the effectiveness of the interrogations, CIA drone strikes and agency “renditions” of suspected militants to third countries may be limited because the operations remain classified.

Haspel needs 51 votes to be confirmed as the first woman director of the CIA in the 100-seat Senate, where Trump’s fellow Republicans hold a 51-49 majority. The agency’s former deputy director, she would succeed Mike Pompeo, a Republican former congressman confirmed last month as secretary of state.

Haspel already has the strong support of many Republicans. As he opened the hearing, the panel’s Republican chairman, Richard Burr, praised Haspel.

“I believe your intellectual rigor, honorable service and outstanding judgment make you a natural fit to lead the CIA,” he said, urging that the hearing not be made “a trial about a long-shuttered program.”

At least one Republican, Senator Rand Paul, has said he opposes her, and others have said they will wait to see how she does at Wednesday’s hearing.

No Democrat has yet expressed support for Haspel.

Senator Mark Warner, the committee’s top Democrat, said his vote on Haspel’s confirmation will largely depend on how she expresses her current views on the harsh techniques and a 2005 decision to destroy tapes of interrogations.

“We must hear how you would react if the president asks you to carry out some morally questionable behavior that might seem to violate a law or treaty,” Warner said in his opening statement.

An undercover officer for most of her more than 30-year career, Haspel in 2002 served as CIA station chief in Thailand, where the agency ran one of the secret prisons where suspected al Qaeda extremists were interrogated using procedures that included waterboarding, which simulates drowning.

In response to a complaint on Monday by Warner that it was selectively declassifying information about Haspel’s 32-year CIA career to make her look good, the agency turned over personnel records detailing Haspel’s service. The documents are classified.

Burr said there are no plans to make such documents public.