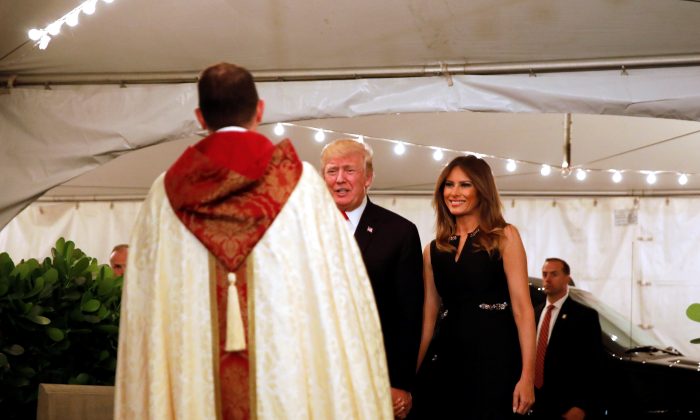 The church—the Church of Bethesda-by-the-Sea—was where the couple got married in 2005.

Several people in the Trump administration, as well as reporters, tweeted photos of the first couple.

President @realDonaldTrump and @FLOTUS Melania Trump are greeted by stand ovation and cheers upon their arrival to attend Christmas Eve church services, tonight, at The Episcopal Church of Bethesda-by-the-Sea in Palm Beach, Florida. #ChristmasEve2017 pic.twitter.com/DwKVMZtnvn

.@POTUS @FLOTUS being led into worship at the Church of Bethesda-by-the-Sea in Palm Beach, where they were married in 2005. pic.twitter.com/BmXxQHDy09

President Trump and Melania have arrived at the church and were greeted by Rev. James Harlan #TrumpInPalmBeach pic.twitter.com/QFyFKkrka5

According to Trump’s social media director, Dan Scavino, the president and first lady received a “standing ovation and cheers” when they arrived at the church.

Before the church service, the Trumps spent the day partaking in Christmas activities. On Sunday, Trump tweeted several times about Christmas.