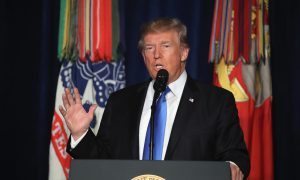 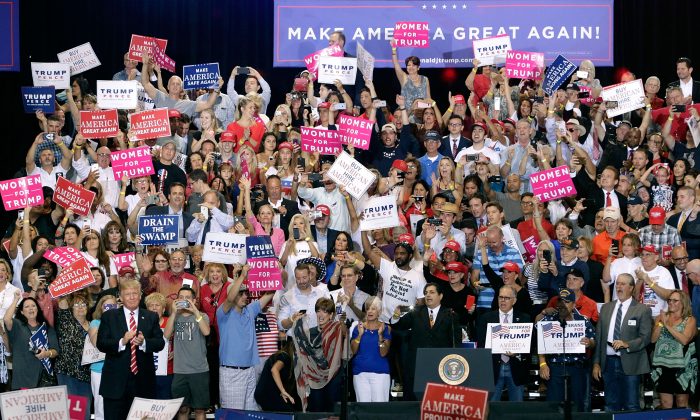 President Donald Trump (L) applauds the crowd of supporters at the Phoenix Convention Center as he takes the stage during a rally in Phoenix, Arizona, on Aug. 22, 2017. (Ralph Freso/Getty Images)
US

President Donald Trump addressed supporters at a rally in Phoenix, Arizona, on Aug. 22, highlighting the progress that his administration has made in renewing American greatness.

A core concept of the Trump administration’s pursuit of American greatness has been a belief in American traditions and the values that the nation was built on—those of equality, freedom, and the pursuit of happiness.

“This evening, joined together with friends, we reaffirm our shared customs, traditions and values,” Trump said.

“We love our country. We celebrate our troops. We embrace our freedom. We respect our flag. We are proud of our history. We cherish our Constitution.”

“We fully protect religious liberty. We believe in law and order. And we support the incredible men and women of law enforcement.”

Propelled to the presidency by many Americans who share the values Trump describes, and who had felt left behind by their government, their support for the president at the rally was abundant. An Epoch Times reporter on-site saw long lines as early as six-hours before Trump’s speech, despite temperatures over 100 degrees.

A key focus of Trump’s first seven months in office has been to revive the economy and increase employment numbers.

Since Trump’s inauguration, over one million jobs have been added, the stock market has reached record highs, and deregulation has brought optimism among business owners to its highest in years.

Trump’s American renewal is based in the belief that America’s form of self-government is the world’s best, and that if the government fulfills it’s core tasks, without overreach, its population will prosper.

“The most sacred duty of government is to protect the lives of its citizens, and that includes securing our borders, and enforcing our immigration laws,” Trump said.

“Our movement is built on the conviction that every American from every background is entitled to a government that puts their needs first,” Trump said.

In his speech, he put his ideas in stark contrast to Democrats, saying they “have no ideas, no policy, no vision for the country other than total socialism and maybe, frankly, a step beyond socialism from what I’m seeing.”

“Under their plan for America, your taxes will double or triple, your service will diminish and your borders will be left wide open for everybody to come in and enjoy our country.”

Trump said that it was time to pass tax cuts for both the middle class and for business. Saying he wants to make America the best place in the world to hire and to start a business.

Describing it as a “massive, self-inflicted, economic wound,” Trump said that high U.S. corporate tax rates have been “pushing jobs and wealth out of the country.”

In his speech Trump repeatedly talked about the importance of bringing wealth back to America and its people as a cornerstone of renewing its greatness.

“We want to lift our people from welfare to work, from dependence to independence, and from poverty to prosperity,” Trump said.

“We want every child to succeed, every community to prosper and every struggling American to have a chance for a better life.”

Trump’s revival of American greatness is one that puts trust in God as a cornerstone of society.

Trump also reiterated what he said at a press conference in New York a week earlier that he believes jobs can have a positive effect on race relations.

“[Race relations] were pretty bad under Barack Obama, that I can tell you. … I think jobs can have a very big and positive impact,” Trump said.

Trump said that he expected wages to rise as the economy improved.

In his speech Trump highlighted the fact that the United States became an energy exporter for the first time ever. The United States is now exporting both oil and natural gas.

On healthcare Trump lamented the fact that Republicans were only 1 vote short in the Senate from passing a healthcare bill.

Trump called on the senate to get rid of its filibuster rule, making it possible that legislation be passed by a majority of the 100 senators rather than the 60 votes needed if the minority filibusters.

“If we don’t, the Republicans will never get anything passed. You’re wasting your time. We have to get rid of the filibuster rule. Right now, we need 60 votes and we have 52 Republicans. That means that eight Democrats are controlling all of this legislation,” Trump said.

Trump said that his administraion has “accomplished historic amounts in a short period of time,” highlighting the fact that so far over 50 pieces of legislation have been signed.

Speaking to his supporters, Trump said “I came to Washington for you. Your dreams are my dreams. Your hopes are my hopes. And your future is what I’m fighting for each and every day.”

But he said it was not just his supporters, but that he cared deeply about all Americans.

“When one part of America hurts, we all hurt. And when one American suffers an injustice, all of America suffers together. We’re all together,” he said.

Expressing his hopes for a country that is more united, Trump pointed to America’s soldiers as an example of an unbreakable team.

“No matter where they come from, no matter what faith they practice, they form a single unbreakable team. … It’s time for all of us to remember that we are all on the same team. We are all Americans, and we all believe right now in America first,” Trump said.

In his speech Trump criticized media organizations for trying to divide Americans with selective and biased reporting.

“I really think they don’t like our country. I really believe that. And I don’t believe they’re going to change,” Trump said.

Highlighting the media’s coverage of the violence in Charlottesville, Virginia, Trumps said that despite multiple statements of him condemning white nationalist groups, media organizations chose not to report on it accurately.

After saying that both sides had some responsibility for the violence, many news organizations suggested that Trump was aiding white nationalist groups.

In calling out the other side Trump had made reference to the far left Antifa extremist group, which has been part of a number of violent protests in the United States so far.

In Phoenix Trump referred again to the group as they had been expected outside of the conference hall.

“The only people giving a platform to these hate groups is the media itself, and the fake news,” Trump said.