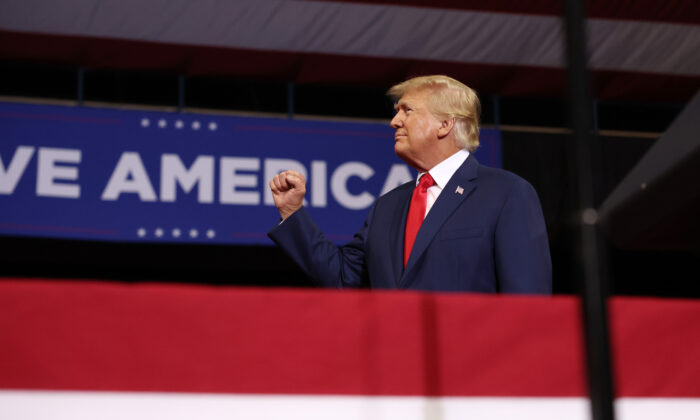 Trumpophobia: When Will It Ever End?

They just never give up, former President Donald Trump’s enemies.

For four years, they subjected the country—and Trump—to the preposterous fantasy of the “Russian Collusion.”

We now know that fetid melodrama was stitched together out of whole cloth by a small army of anti-Trump partisans.

There were the operatives in Hillary Clinton’s campaign who organized and paid for the so-called dossier—really, a steaming pile of lies, fabrications, and baseless innuendo—let loose on the world by the discredited spook Christopher Steele.

Did I mention that Clinton’s campaign actually paid for this rubbish, opposition “research” covertly insinuated into the news cycle as a damaging revelation?

Then there were various operatives in the FBI and the “intelligence community”—a phrase that will never again be able to be heard straight.

He leaked material to the press; acknowledged that Clinton had run the State Department from an insecure server in her home, where thousands of classified emails resided; and who, presented with a subpoena to turn in those emails, simply BleachBit 30,000 emails and dared him to do something about it.

He didn’t, of course. “No reasonable prosecutor” would pursue the case, he said.

Then there was doddering Robert Mueller, former head of the FBI, the shuffling suit that presided over the two-year, $40 million boondoggle “investigation” into Trump and Russian collusion.

When it finally came time for him to testify before Congress, he did his Joe Biden “I-am-an-out-of-touch-senile-tool” imitation to perfection.

Asked about Fusion GPS, the dirt-digging, reputation-smearing company that hired Steele, Mueller said he was “not familiar” with that.

Scary possibility? He really wasn’t, even though he had been heading up an investigation for nearly two years that plastered the name of the company throughout the media daily.

Yes, the country’s in the very best of hands.

The whole fraudulent spectacle is like a gigantic onion, with layer after layer of hectoring, mendacious posturing peeled off and put forth as if it were news.

Remember Carter Page? He was the sometime adviser to the Trump campaign that The New York Times early on identified as ground zero in the caper.

The feds were after him, you see. He was that formerly rare beast, a U.S. citizen who was being surveilled under the aegis of a FISA warrant.

Weren’t those babies intended to ferret out foreign spies?

Yes, but you know what they say about good intentions.

Besides, it was but the work of a moment for Kevin Clinesmith, an FBI lawyer, to alter an email confirming that Page was a CIA asset.

He just added the little word “not” to the document, a FISA warrant authorizing the surveillance against Page was produced, and, presto, a backdoor to the Trump campaign was opened.

Think about that: Clinesmith falsified a government document in order to mobilize the surveillance apparatus of the U.S. government against a candidate for president he didn’t like.

Don’t try this at home.

What happened to Clinesmith? Nothing.

Well, he got probation, and he was temporarily suspended from practicing law but was quietly rehabilitated last year.

It’s good to be a member of the nomenklatura.

And the beat goes on.

The more we know about last month’s FBI raid on Mar-a-Lago, Trump’s residence in Palm Beach, Florida, the more preposterous it looks.

At first, we were told that Trump was sitting on nuclear secrets, the key to Putin’s treasure house, a copy of the files from Clinton’s home brew server, and so forth.

The commentariat went to work like a school of piranhas, tearing into the little scraps of meat flung from the portholes of the FBI’s lumbering scow.

But then a few little bells of sanity began dinging.

Last week, a list (pdf) of what the FBI hoovered up from Trump’s home was released.

There were some folders marked “Secret” and “Top Secret.”

Who knows what was in them, who packed them, and whether their presence in Trump’s house makes any difference?

But what impresses one most about the list of items taken is their jumble-sale character.

That list includes a lot of empty folders, clothing, gifts, books, and miscellaneous “government documents,” apparently including Trump’s passports. Also, according to a tally made by Don Surber, 1,693 newspaper clippings were taken as well.

This raises the question, as Surber put it, why on earth did (anti-Trump) U.S. Magistrate Judge Bruce Reinhart issue a warrant to authorize the FBI to raid a former president’s private residence?

A look at the warrant and what was collected shows that it was a promiscuous grab-anything-you-want authorization, precisely the sort of intrusion by the state that the Fourth Amendment was designed to forbid.

The amendment is admirably clear and succinct.

“The right of the people,” it reads, “to be secure in their persons, houses, papers, and effects, against unreasonable searches and seizures, shall not be violated, and no Warrants shall issue, but upon probable cause, supported by Oath or affirmation, and particularly describing the place to be searched, and the persons or things to be seized.”

As Surber noted, “The confiscation of items totally unrelated to national security shows that far from upholding the Constitution, Biden’s Boys were committing crimes. Taking Melania’s panties—or whatever articles of clothing they took—is not an act of investigation. Confiscating personal items is intimidation.”

Yep. But shortly after that raid, we saw Joe Biden doing his best totalitarian-kitsch routine in Philadelphia, flanked by Marines on a stage set swathed in a melodramatic red that Leni Riefenstahl would have loved.

The speech was supposed to be about the “soul of the nation.”

Really, however, it was an unhinged attack on Trump, his supporters, and his populist agenda.

“MAGA forces,” he shouted, “… are a threat to our personal rights, to the pursuit of justice, to the rule of law, to the very soul of this country.”

So maybe we should applaud the FBI’s raid against so heinous a threat?

In a blow to the Get Trump fraternity, she just granted Trump’s request for a “special master” (a new term that will be ubiquitous now for a couple of weeks), an independent assessor, usually a lawyer not affiliated with the government, who’s empowered to review the materials taken by the government.

So far, all of the candidates proposed by the government have been notable for their hostility to Trump.

Heidi Kitrosser, for example, a law professor at Northwestern University, has called Trump “an existential threat to democracy,” a “shameless” and “spineless” narcissist who has a “dangerous obsession with image control” and who espouses a bigoted immigration policy.

Five or six years into the regime’s unremitting attack on all things Trump, we’re entitled to ask, will it ever end?

The Babylon Bee found a bit of humor in the situation with its story, “After Using FBI to Suppress Son’s Crimes and Raid Political Rival’s Home, Biden Warns Democracy In Danger.”

Closer to home was Trump’s observation that “in reality, they’re not after me, they’re after you. I’m just in the way.”