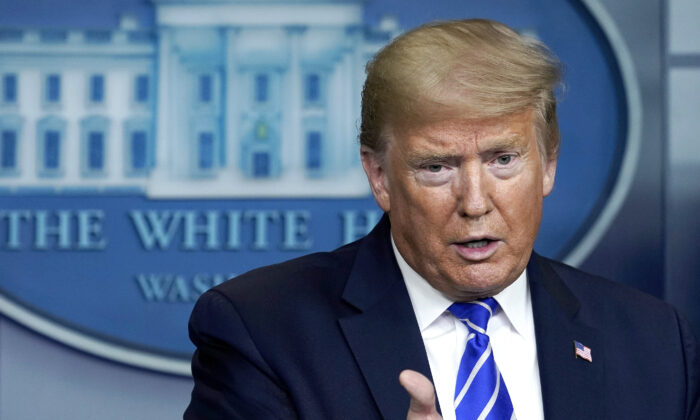 Trump Writes CCP Virus Briefings Are ‘Not Worth the Time’

There was no White House CCP virus briefing on Saturday, and instead, President Donald Trump wrote that they aren’t “worth the time and effort.”

“What is the purpose of having White House News Conferences when the Lamestream Media asks nothing but hostile questions, & then refuses to report the truth or facts accurately. They get record ratings, & the American people get nothing but Fake News. Not worth the time & effort!,” Trump wrote on Twitter.

The Twitter post came at 6 p.m. on Saturday, or around the time he usually holds his briefings.

It isn’t clear whether a briefing on the CCP (Chinese Communist Party) virus, a type of novel coronavirus that emerged in China last year and causes the disease COVID-19, will be held on Sunday evening.

The post came after he made comments about disinfectant, sunlight, and bleach on Thursday. On Friday, he told a reporter that he was “asking a question sarcastically to reporters like you just to see what would happen.”

“I think the media is very slicey and dicey about how they put sentences together in order to create headlines. …We know for millennials in other studies that some people may only read the headlines. And if there’s not a graphic, they’re not going to look any further than that,” Birx told Fox News.

She added, “I think we have to be responsible about our headlines. I think often, the reporting maybe accurate in paragraph three, four, and five. But I’m not sure how many people actually get to paragraph three, four, and five. And I think the responsibility that the press has is to really ensure that the headlines reflect the science and data that is in their piece itself.”