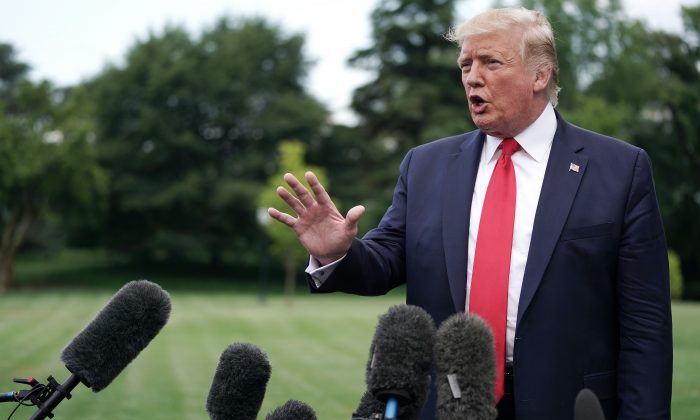 President Donald Trump talks to reporters as he departs the White House for a campaign rally in Washington on July 17, 2019. (Chip Somodevilla/Getty Images)
Trump Administration

President Donald Trump told reporters at the White House on July 19 that he is trying to secure the release of American rapper A$AP Rocky who was arrested in Sweden.

Trump made the revelation amid a White House event to commemorate the anniversary of the 1969 Apollo 11 moon landing.

The president said the issue was first brought to his attention by his wife, as well as his African-American friends who had personally called him for help to release the rapper—whose real name is Rakim Mayers.

“Actually, the one that knew about A$AP Rocky first was our First Lady. She told me, ‘Can you help A$AP Rocky?’” Trump said before asking Melania if she wanted to make a statement.

Melania said she had been working with the State Department to get the rapper released. Rocky was born in Harlem, New York City.

“We hope to get him home soon,” she said.

Trump noted the good relationship he had with Sweden’s leadership and said they have “already started” talks with them in relation to the rapper’s situation.

“I have been called by so many people to help A$AP Rocky,” the president said.

Thank you @realDonaldTrump , @SecPompeo, Jared Kushner & everyone involved with the efforts to Free ASAP Rocky & his two friends. Your commitment to justice reform is so appreciated 🙏🏼🤞🏼 https://t.co/Ym1Rzo5Z6c

Pompeo is reportedly taking the lead on Rocky’s detention situation, according to a July 18 Axios report. An anonymous source told the outlet that Trump had told his team he wanted the issue to be resolved. Rocky’s team is also in touch with the White House, the source said.

According to Politico, Rocky was arrested on July 2 after he turned himself into authorities for questioning about a street fight he was apparently involved in.

A person close to the rapper told Politico that Rocky and his entourage were in Stockholm for a music festival and “minding their own business” while walking in the city when they were verbally harassed by two men that had started following them. A fight later broke out.

The Justice Department announced on July 19 that roughly 3,100 U.S. inmates, including many convicted of drug offenses, will be released early from federal prisons for good behavior under a criminal justice reform law signed last year by Trump.

Officials detailed the early impact of the law, passed with bipartisan support in Congress last December and championed by criminal justice advocates across the political spectrum, to help reduce sentencing disparities for low-level offenses historically with higher conviction rates for racial minorities.

In addition to the good behavior releases, officials said more than 1,691 inmates have had their sentences reduced after a provision in the law retroactively recalculated sentences to reduce disparities between those who committed crimes involving crack versus powder cocaine. Those convicted for crack offenses historically have been more likely to be a racial minority.

The law, called the First Step Act, eases harsh sentencing rules for non-violent offenders and requires the Justice Department’s Bureau of Prisons to implement new programs to help reduce recidivism. It also required the bureau to retroactively recalculate good behavior credits, a step that reduces some sentences by up to 54 days per year.

Trump and Kushner had both lobbied for the measure previously.