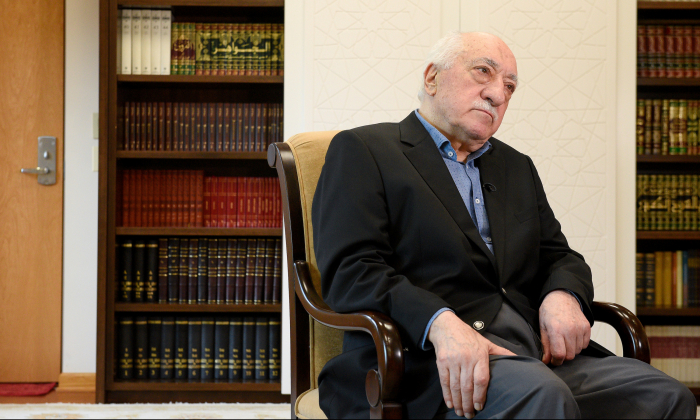 Trump Willing to Look at Extraditing Turkish Cleric, But Noncommittal

WASHINGTON–President Donald Trump told his Turkish counterpart Tayyip Erdogan that Washington “would take a look at” the possibility of extraditing a U.S.-based Muslim cleric who Ankara suspects of being behind a 2016 coup attempt, but he made no commitment, the White House said on Dec. 18.

“The only thing he said is that we would take a look at it,” White House spokeswoman Sarah Sanders told reporters. “Nothing further at this point beyond that … nothing committal at all in that process.”

Turkey’s foreign minister said on Dec. 16 that Trump told Erdogan that Washington was working on extraditing the cleric, Fethullah Gulen, a former Erdogan ally who has lived in self-imposed U.S. exile for nearly two decades.

Asked about the comment on Dec. 17, another White House official said only that Trump did not commit to extraditing Gulen when he spoke to Erdogan at the Group of 20 summit in Buenos Aires last month. The official offered no further detail on the conversation.

Turkish officials blame Gulen for a failed coup in Turkey in which rogue soldiers attacked parliament and shot unarmed civilians.

The extradition of Gulen is just one of several issues that have strained the relationship between the two countries.

The United States and Turkey, NATO allies, have gone through a rough patch in 2018, exacerbated by the Turkish detention of a U.S. pastor. Turkey’s release of the pastor, Andrew Brunson, was a “tremendous step” toward improved relations, Trump said in October, while denying he made a deal with Ankara for the move.

But tensions flared again last week over the two countries’ positions on Syria. The Pentagon warned that unilateral military action into northeast Syria by any party would be “unacceptable,” after Turkey said it would launch a new military operation in the region.

Trump said last month he was not considering extraditing Gulen as part of efforts to ease Turkish pressure on Saudi Arabia over the killing of Saudi journalist Jamal Khashoggi in Istanbul.