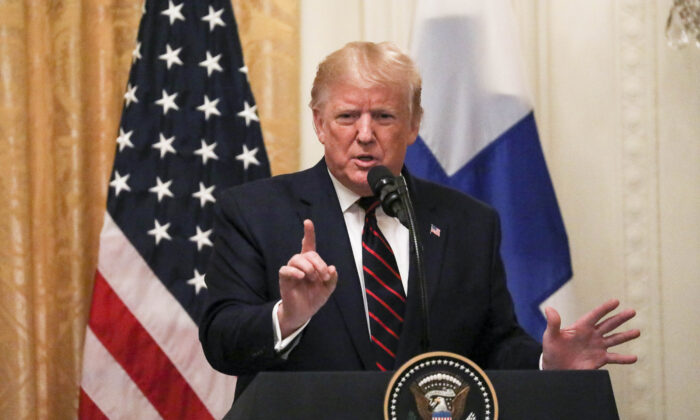 President Donald Trump at a press conference in the East Room of the White House in Washington on Oct. 2, 2019. (Charlotte Cuthbertson/The Epoch Times)
Viewpoints

There has been heavy press coverage about recent comments by President Donald Trump to the effect that we are at war over the impeachment proceedings related to the Ukraine debacle. The president is both right and wrong in making that statement.

He is correct that the Democrats have transitioned into a full “war” footing and have moved past all limits set by truth and justice and are using the Ukraine phone call as an excuse. They are foisting the whole impeachment discussion on the American people and no longer care what they have to do or say to try to get their way.

Read the transcript of the telephone conversation and it’s very hard to argue anything illegal was done. Any intellectually honest person with even a basic understanding of the facts can see the president has done nothing illegal.

In a strange twist, we also learned that the CIA secretly changed the whistleblower rules so that someone could be a whistleblower without firsthand knowledge of the incident in question. Previously, firsthand knowledge was an absolute requirement. The timing of the unprecedented secret change of rules at the CIA is extraordinarily interesting as well. This change in rules took place in August, just in time for the whistleblower to come forward with his report, even though he didn’t have firsthand information.

Those changes in the rules couldn’t have been done without the knowledge and agreement of the CIA leadership, and Trump needs to take a close look at the integrity of current CIA Director Gina Haspel and her leadership team. Which brings us to where Trump is wrong about the war being about the current impeachment hearings.

The president is mistaken in his estimation of the problem. It is much larger. Something I have often written about is the leadership at the FBI, Department of Justice (DOJ), and CIA specifically. At a recent closed-door event with U.S. diplomats in New York, Trump was recorded stating that “we’re at war” over impeachment caused by a “sick” whistleblower who is “almost a spy.”

If the rules were indeed changed by the CIA leadership in order to facilitate bringing the whistleblower forward, then it was done with planning and forethought, and the whistleblower was in fact a spy planted in the White House by the CIA. In other words, it was done on purpose to set the president up. There are even reports that someone else wrote the complaint for the whistleblower, which is solid evidence of a conspiracy.

At the very least, this can only be described as worse than a war over impeachment. At worst, we have an organized coup attempt by senior government officials, which may in fact approach the level of treason.

The Ukraine hoax emerged immediately after the allegation of Russian collusion was ended with the delivery of the Mueller Report. Democrats, the mainstream media, and the potentially traitorous elements within the intelligence community seemed to have acted at a furious pace to come up with this new scenario to oust Trump.

It’s getting more desperate and is taking place at a rapid-fire pace. This is for a simple and self-serving reason: the FISA investigation. It appears there will be a large number of indictments against senior FBI and DOJ officials who appear to have been trying to frame Trump.

Everyone in Washington, Republicans and Democrats alike, the press and senior government officials, all know these indictments are coming. Once they hit, and the deep corruption within the Democratic ranks shows, they will be horrifically damaged in the upcoming 2020 elections.

The Democrats really only have one defense, and that is to get rid of Trump before the disaster befalls them.

Short of that, they need to badly smear the president to reduce the impact of the likely indictments against Democratic operatives. They’re playing their final cards, which is also a full-court press to discredit U.S. Attorney General William Barr in advance of the indictments. This is just the beginning, and it’s not going to stop.