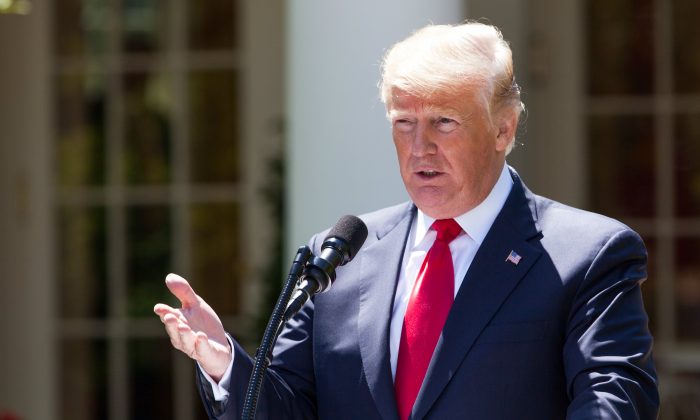 President Donald Trump hosts a joint press conference with President Muhammadu Buhari (not pictured) of the Federal Republic of Nigeria in the Rose Garden of the White House in Washington on April 30, 2018. (Charlotte Cuthbertson/The Epoch Times)
Trump Administration

President Donald Trump suggested he’d have to step in if the Justice Department doesn’t turn over documents requested by Congress.

“A Rigged System – They don’t want to turn over Documents to Congress. What are they afraid of? Why so much redacting? Why such unequal ‘justice?’ At some point I will have no choice but to use the powers granted to the Presidency and get involved!” Trump wrote on Twitter the morning of Wednesday, May 2.

A Rigged System – They don’t want to turn over Documents to Congress. What are they afraid of? Why so much redacting? Why such unequal “justice?” At some point I will have no choice but to use the powers granted to the Presidency and get involved!

The documents relate to investigations into alleged abuse of spying warrants against the Trump campaign by the Obama administration and Hillary Clinton’s use of a private email server while she was the state secretary. The investigations are led by The House Judiciary Committee and the House Oversight and Government Reform Committee. Another inquiry delves into the FBI’s Office of Professional Responsibility recommendation to fire former FBI Deputy Director Andrew McCabe.

Chairmen of the committees, Bob Goodlatte (R-Va.) and Trey Gowdy (R-S.C.), repeatedly requested the documents, until finally issuing a subpoena on March 22.

On April 23, Goodlatte and Gowdy announced they had met with Lausch and struck a deal regarding the document requests.

The House investigators have requested 1.2 million pages of documents, the same ones reviewed by the Justice Department’s Office of the Inspector General. They’ve received 3,000 documents, The Hill reported on April 5.

Meanwhile, members of the conservative House Freedom Caucus have reportedly drafted articles of impeachment against Deputy Attorney General Rod Rosenstein, intending to launch impeachment as a “last resort,” in case he won’t hand over the documents.

“That was material evidence that was withheld from us by redacting materials,” Goodlatte told Fox News.

Strzok led the Clinton server investigation and, as multiple media reported, changed language characterizing her actions from “grossly negligent” to “extremely careless” in a draft statement of then- FBI Director James Comey.

“Gross negligence” would have required prosecution under federal law.

Strzok and Page expressed severe bias against Trump and toward Clinton in their messages, even discussing an “insurance policy” in case Trump won the election. They later became part of the team of special counsel Robert Mueller, which is looking into Russian government interference in the elections and allegations that the Trump campaign colluded with such interference.

Strzok was also reportedly one of the agents who interviewed Trump’s then-national security adviser, Michael Flynn. The interview was later used to accuse Flynn of lying to the FBI, even though the “agents did not detect any deception during Flynn’s interview,” according to a House intelligence committee report.

Strzok was removed from Mueller’s probe in the summer of 2017 and Page was reassigned.

“Immediately upon learning of the allegations, the Special Counsel’s Office removed Peter Strzok from the investigation,” said Peter Carr, a spokesman for Mueller, according to NPR. “Lisa Page completed her brief detail and had returned to the FBI weeks before our office was aware of the allegations.”

Update: The article was updated to clarify the source of the claim that Peter Strzok was one of the two agents who interviewed Michael Flynn.