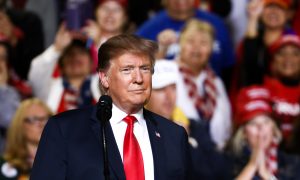 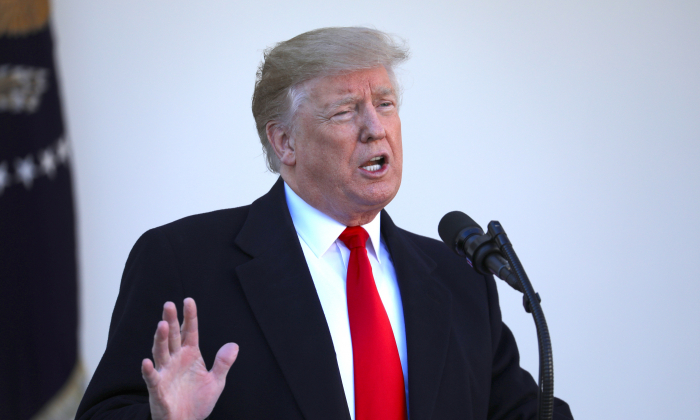 The Trump administration wants to cut off $929 million in federal funding grants to California’s ambitious high-speed rail project and, at the same time, is “actively exploring” every legal option to take back an additional $2.5 billion in federal grant funds that had already been given to the state.

The announcement—made in a Feb. 19 letter from the U.S. Department of Transportation to the California High-Speed Rail Authority—came after President Donald Trump pledged to reclaim a total of $3.5 billion in funding grants. The bullet train was originally planned to run between Los Angeles and San Francisco.

But the railway project—which was first approved by California voters in 2008—has become controversial after having faced repeated delays, management concerns, and cost increases. Trump’s administration argued on Feb. 19 that the state did not provide matching dollars, which are required, and said they could not fully complete construction by the 2022 deadline.

Turning to Twitter, Trump urged California on Feb. 20 to return the money and lambasted recent reports that said the state was planning to reduce the scope of their railway project, which has been under construction for years.

“California now wants to scale back their already failed “fast train” project by substantially shortening the distance so that it no longer goes from L.A. to San Francisco,” he wrote. “A different deal and record cost overruns. Send the Federal Government back the Billions of Dollars WASTED!”

California now wants to scale back their already failed “fast train” project by substantially shortening the distance so that it no longer goes from L.A. to San Francisco. A different deal and record cost overruns. Send the Federal Government back the Billions of Dollars WASTED!

The $77 billion bullet train project has long been a subject of criticism by the Trump administration and the Republican Party. Trump earlier compared the high costs of the “failed fast train project” to his wall along the U.S.–Mexico border where he said the train was “hundreds of times more expensive than the desperately needed Wall!”

“This is clear political retribution by President Trump, and we won’t sit idly by,” he said in a statement. “This is California’s money, and we are going to fight for it.”

In his first State of the State address to lawmakers on Feb. 12, Newsom said California will dramatically scale back on the project. He said they would still finish a smaller section.

“Let’s be real. The current project, as planned, would cost too much and respectfully take too long,” Newsom said. “There’s been too little oversight and not enough transparency.”

Newsom told lawmakers that the state will finish a 119-mile high-speed rail link between Merced and Bakersfield in the state’s Central Valley, which was met with derision on social media.

“I know that some critics will say this is a ‘train to nowhere,’ ” Newsom said during his speech. “But that’s wrong and offensive.”

There are several scenarios in which the federal government can take money back from California, as outlined in the grant agreement signed in 2010. One scenario is if the grantee fails to make “adequate progress” or if it “fails to complete the project or one of its tasks.” Another example would be if the state failed to meet its matching fund requirements—which California has failed to fully match with its $2.5 billion stimulus money, although it is in the process of doing so now. Meanwhile, the California High-Speed Rail Authority had already budgeted for the full $3.5 billion in funding.

The Feb. 19 letter from the U.S. Department of Transportation said Newsom’s comments at the address further pushed the Trump administration’s concerns.

“Governor Newsom presented a new proposal that represents a significant retreat from the State’s initial vision and commitment and frustrates the purpose for which Federal funding was awarded,” the letter said.