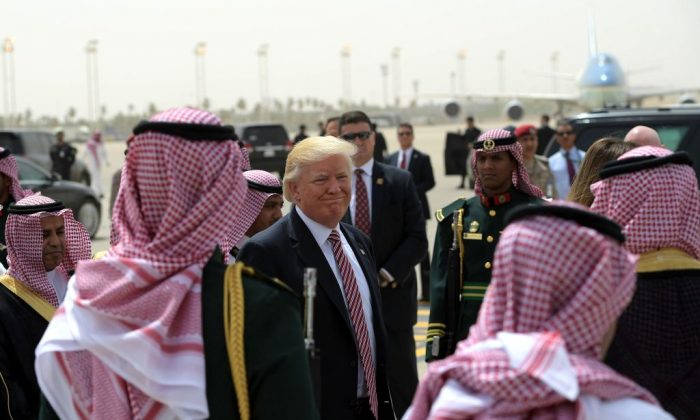 President Donald Trump (C) makes his way to board Air Force One in Riyadh as he head with the First Lady to Israel on May 22, 2017. (MANDEL NGAN/AFP/Getty Images)
Middle East

Seventeen royal princes and 38 high-level ministers have been arrested since Saturday in a sweeping purge by a recently-formed anti-corruption committee led by Crown Prince Mohammed bin Salman, according to a list obtained by CNN. Two princes have also been killed: one in a helicopter crash, and another during an attempted arrest.

Trump wrote on Twitter on Nov. 6 “I have great confidence in King Salman and the Crown Prince of Saudi Arabia, they know exactly what they are doing…. Some of those they are harshly treating have been “milking” their country for years!”

….Some of those they are harshly treating have been “milking” their country for years!

The arrests began shortly after Trump sent a Twitter message on Nov. 4 indicating that the United States will open the door for Saudi Arabia to cash in on its oil business on the lucrative New York Stock Exchange.

“Would very much appreciate Saudi Arabia doing their IPO of Aramco with the New York Stock Exchange,” Trump wrote on Saturday morning. “Important to the United States!”

The timing of the message and the arrests may not be accidental given the significance of Saudi Arabia to Trump’s foreign policy. The president’s first visit was to Saudi Arabia and he brought nearly his entire cabinet on the trip.

Trump’s speech in Saudi Arabia centered singularly on the eradication of radical Islamic terrorism. He said that the “path to peace begins” in Saudi Arabia and offered the heads of state in attendance a choice, affirming that the United States will support those who oppose the spread of terrorism.

Crown Prince Salman, whom Trump addressed in the Aramco tweet, is a young and reform-minded leader who showed that he is willing to address to problem of radical Islamic terrorism in exchange for peace and prosperity for his people. The crown prince and Trump opened the Global Center for Combating Extremist Ideology after Trump’s speech, signaling the prince’s support for the U.S. leader’s cause.

Saudi Arabia is considered one of the most prolific state sponsors of Islamic terrorism. Trump offered the crown prince a choice and, by all appearances, the prince decided to side with the United States. Trump’s message of support for the cause indicates that the two are on the same page.

The cleanup in Saudi Arabia also appears to be linked to Trump’s goal of “draining the swamp” in Washington. Millions of dollars worth of Saudi Arabian currency goes to non-profits, including the Clinton Foundation and The McCain Insitute, that are linked to top U.S. politicians