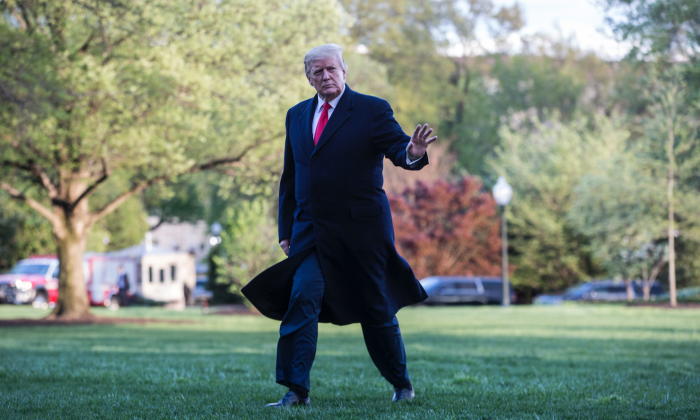 Trump Vetoes Resolution to End US Involvement in Yemen War

President Donald Trump vetoed a congressional resolution on April 16 that aimed to end U.S. involvement in the civil war in Yemen, the White House said.

Trump wrote to the Senate that the joint resolution, dubbed S.J. Res. 7, was “an unnecessary, dangerous attempt to weaken my constitutional authorities.” He said the legislation—a War Powers Resolution that would limit the president’s ability to send troops into action—would endanger the lives of U.S. citizens and service members “both today and in the future.”

The Yemen civil war first began in 2015 between the internationally recognized Yemeni government, led by the Saudis, and the Houthi rebels, who are backed by Iran. Both sides say they are the official government of Yemen. The ongoing conflict, now four years long, has forced the country into a humanitarian crisis.

The president said the resolution was unnecessary because the United States is not engaged in hostilities in, or affecting Yemen. He also said it was “dangerous.”

“There are no United States military personnel in Yemen commanding, participating in, or accompanying military forces of the Saudi‑led coalition against the Houthis in hostilities in or affecting Yemen,” Trump said.

“The Congress should not seek to prohibit certain tactical operations, such as in-flight refueling, or require military engagements to adhere to arbitrary timelines. Doing so would interfere with the President’s constitutional authority … and could endanger our service members.”

According to the U.N., more than 22 million people, or 75 percent of the population, are in need of humanitarian assistance, “more than any other single country today.”

The U.S. government has provided more than $854 million in humanitarian assistance to Yemen since 2017, according to the U.S. State Department.

The resolution, which passed both the Senate and the House of Representatives, marks the first time both chambers of Congress had supported a War Powers Resolution.

The 247–175 vote in the Democratic-majority House and the 54–46 vote in the Republican-led Senate was not enough to override the veto, which requires two-thirds majorities in both chambers.

Trump’s veto can also be seen as a sign of the administration’s close relationship with Saudi Arabia as he attempts to further isolate Iran. The United States provides billions of dollars of arms to the Saudi-led coalition fighting in Yemen.

The top Republican on the House Foreign Affairs Committee, Rep. Michael McCaul (R-Texas) acknowledged the dire situation in Yemen for civilians, but spoke out in opposition to the measure when it was passed. McCaul said it was an abuse of the War Powers Resolution and predicted it could disrupt U.S. security cooperation agreements with more than 100 countries.

Trump said the United States is providing its support for a number of reasons, the primary one being to protect the safety of the more than 80,000 U.S. citizens who reside in countries that have been subject to Houthi attacks.

“Houthis, supported by Iran, have used missiles, armed drones, and explosive boats to attack civilian and military targets in those coalition countries, including areas frequented by American citizens, such as the airport in Riyadh, Saudi Arabia,” Trump wrote.

“In addition, the conflict in Yemen represents a “cheap” and inexpensive way for Iran to cause trouble for the United States and for our ally, Saudi Arabia.”

In 2018, the Trump administration considered designating Yemen’s Houthi rebels a terrorist organization, according to The Washington Post.

The president also mentioned that his administration is pushing negotiations to end U.S. military engagement in Afghanistan and withdrawing troops in Syria where the ISIS caliphate was recently eliminated. He said the joint resolution harms the foreign policy of the United States with respect to Yemen and hurts bilateral relationships.

This is the second veto of Trump’s presidency after he rejected a resolution in March that sought to overturn his national emergency border declaration. The declaration enabled him to secure funds for the construction of the U.S.–Mexico border wall.