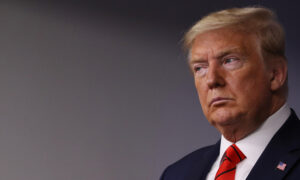 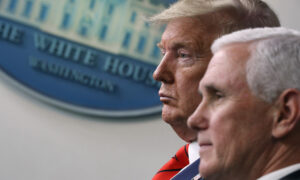 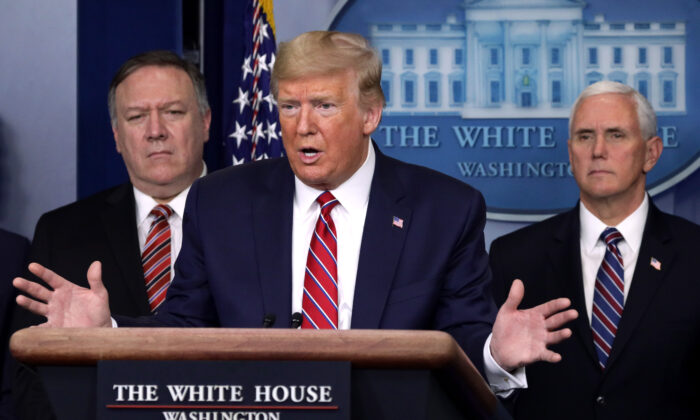 President Donald Trump speaks as Secretary of State Mike Pompeo and Vice President Mike Pence listen during a news briefing on the latest development of the coronavirus outbreak in the United States at the James Brady Press Briefing Room at the White House in Washington on March 20, 2020. (Alex Wong/Getty Images)
Trump Presidency

President Donald Trump said on Friday that he was using the Defense Production Act to fight the CCP (Chinese Communist Party) virus—commonly known as the novel coronavirus—two days after he announced he was signing an executive order invoking the measure.

Trump on Wednesday said he was signing the new order “just in case” his administration needed its powers to expand the supply of resources to deal with the COVID-19 outbreak.

Speaking to reporters in Washington on Friday, Trump said he was using the act.

“I invoked the Defense Production Act and last night, we put it into gear,” Trump said.

“We need certain equipment that the states are unable to get by themselves. So we’re invoking it to use the powers of the federal government to get things that they need.”

Two items that the government is going to send to states: masks and ventilators.

The federal government has millions of masks and the act will allow it to distribute masks directly to the states.

“The act is very good for things like this,” Trump said.

Millions of additional masks will be needed during the outbreak, officials said earlier in the week.

Another aspect of the act (pdf) lets the government force private businesses to manufacture medical supplies and equipment and to make government contracts the top priority.

The act also gives the president the power to authorize loan guarantees and order the take over or enhancement of private industrial facilities.

More than two dozen senators urged Trump earlier in the month to invoke the Korea War-era program to increase production of masks, ventilators, and respirators. Expanding hospital capacity could also be done, the lawmakers said.

Governors on a call with Trump Thursday asked about how the Trump administration would use the act, with Massachusetts Gov. Charlie Baker asking about how the implementation of the act would be used to generate personal protective equipment, which includes masks and gloves.

Maryland Gov. Larry Hogan, chairman of the National Governors Association, told the president that states want to be involved in helping hammer out how the act can be used, especially with industries in certain states.

Trump’s using the act came as the number of COVID-19 cases in the United States crossed 16,000, according to Johns Hopkins University. The country has the sixth-highest case count in the world.

Two hundred and sixteen people in America have died from the new illness.