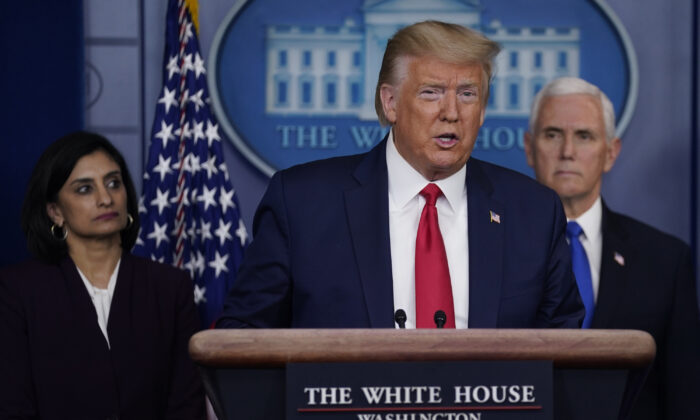 President Donald Trump speaks to the press at the White House in Washington on March 18, 2020. (Evan Vucci/AP Photo)
By Tom Ozimek

President Donald Trump announced at a White House briefing that he was invoking the Defense Production Act (DPA) to expand the supply of resources available to deal with the COVID-19 outbreak.

Trump said he would sign the DPA measure on March 18, adding that it was being deployed “just in case” and that it “could do a lot of good things, if we need it.”

Earlier, more than two dozen senators urged Trump to invoke the Korean War-era program to increase production of masks, ventilators, and respirators, as well as expand hospital capacity to combat the outbreak.

“I join 27 of my colleagues in a letter to President Trump urging him to invoke the Defense Production Act of 1950, which authorizes the president to strengthen capacity and supply in extraordinary circumstances,” Senate Minority Leader Chuck Schumer (D-N.Y.) said on March 18.

Sen. Ed Markey (D-Mass.) also has called for the deployment of the program. He said in a statement that the nation’s hospitals face a serious shortage of personal protective equipment for staff and infected patients, including gowns, gloves, face shields, surgical masks, and N95 respirators.

He added the Department of Health and Human Services (HHS) estimates that the United States could need up to 3.5 billion respirators, while the Strategic National Stockpile has only 12 million.

Defense Secretary Mark Esper said at the March 18 briefing that the military is “leaning forward” in its response against the virus.

Esper said the military would provide more than 5 million respirators from its own strategic reserves and supply them to the HHS. He added that 1 million masks would be “available immediately.”

The Pentagon said on March 17 that it would also provide 2,000 specialized ventilators to federal health authorities.

Esper also said that on March 17, he received a briefing at the U.S. Army Medical Research Institute of Infectious Diseases at Fort Detrick, Maryland, which he called “probably the military’s premier research institute.”

The secretary said the Fort Detrick facility is part of an interagency team working on a COVID-19 vaccine and therapeutics.

“They’re making great progress there,” he said, adding that the Pentagon would certify its 16th lab to help process COVID-19 tests from across the country.

He said a number of field and expeditionary hospitals were ordered to prepare for deployment if needed.

Esper also said he would meet with New York state authorities to determine how the military could potentially assist in their efforts to contain the virus.

De Blasio said on March 18 that he’s “almost to the point” of recommending to New York Gov. Andrew Cuomo that the city implement a “shelter-in-place” policy that would have people stay in their homes.