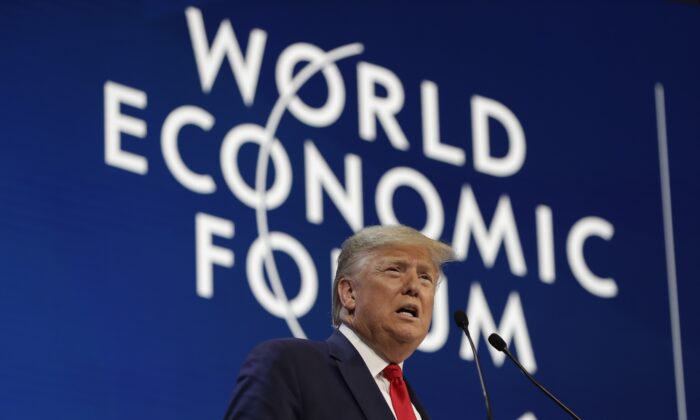 Trump: US Will Join One Trillion Trees Initiative

The United States is joining the One Trillion Trees Initiative, President Donald Trump said on Jan. 21.

Speaking at the World Economic Forum in Davos, Switzerland, Trump said the United States is joining the initiative.

“We’re committed to conserving the majesty of God’s creation and the natural beauty of our world,” Trump said.

America “will continue to show strong leadership in restoring, growing, and better managing our trees and our forests,” he added, drawing applause.

The One Trillion Trees Initiative was announced during the forum. It encourages countries to plant trees as part of the effort to combat climate change. The goal is to plant 1 trillion trees by 2050.

Ecologist Dr. Thomas Crowther told the forum last year that humans should plant 1.2 trillion trees to cancel out the past decade of CO2 emissions.

“There’s 400 gigatons now, in the 3 trillion trees [currently in the world], and if you were to scale that up by another trillion trees, that’s in the order of hundreds of gigatons captured from the atmosphere—at least 10 years of anthropogenic emissions completely wiped out,” Crowther said.

Trump told Davos attendees on Jan. 21 that the world should embrace optimism.

“To embrace the possibilities of tomorrow, we must reject the perennial prophets of doom and their predictions of the apocalypse,” Trump said.

“They are the errors of yesterday’s fortunetellers, and we have them, and I have them, and they want to see us do badly, but we don’t let that happen.

Trump is “living on a different planet because he seems to think the well-being of Americans can continue without taking into account the planetary boundaries,” she told The Associated Press.

Trump’s announcement of joining the trees initiative came as House Republicans plan to introduce a package of bills that will address climate change.

House Speaker Kevin McCarthy (R-Calif.) told the Washington Examiner that the legislation would use conservative, free-market principles as opposed to socialist proposals like the Green New Deal that rely on taxes.

He said younger voters are focused on climate change.

“We need to have an open discussion about; what should the party look like 20 years from now, and we should be a little nervous,” McCarthy said. “We have to do something different than we’ve done.”

The “12 in ’20” bills some Republican House members have introduced include legislation expanding tax credits for projects that capture carbon, actively managing forests to reduce wildfire risk, and making sure fuel is available for nuclear technology.