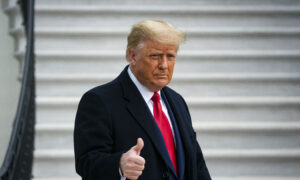 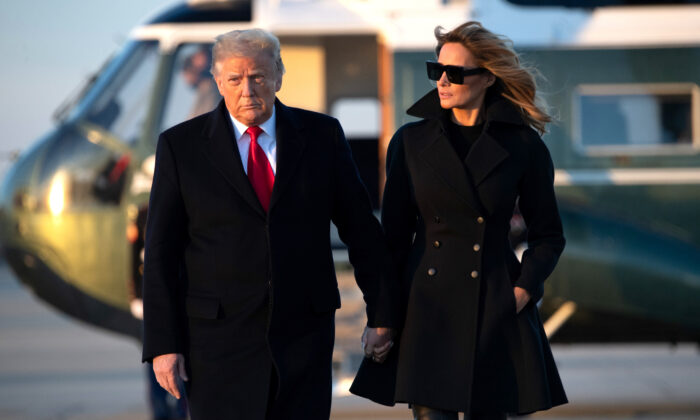 U.S. President Donald Trump and First Lady Melania Trump walk to board Air Force One prior to departure from Joint Base Andrews in Maryland as they travel to Mar-a-lago for Christmas and New Year's on Dec. 23, 2020. (SAUL LOEB/AFP via Getty Images)
2020 Election

President Donald Trump called on Republican senators to “step up and fight for the presidency” as they continue to distance themselves from efforts to challenge Electoral College results on Jan. 6.

“Time for Republican Senators to step up and fight for the Presidency, like the Democrats would do if they had actually won,” Trump wrote on Dec. 26 in a series of Twitter posts.

“Courts are bad, the FBI and ‘Justice’ didn’t do their job, and the United States Election System looks like that of a third world country. Freedom of the press has been gone for a long time, it is Fake News, and now we have Big Tech (with Section 230) to deal with.

“But when it is all over, and this period of time becomes just another ugly chapter in our Country’s history, WE WILL WIN.”

The president has ramped up his criticism of Republican senators in recent days over their reluctance to support efforts to challenge votes cast by presidential electors in contested states during the Jan. 6 joint congressional session, where Vice President Mike Pence—as president of the Senate—will serve as presiding officer.

Several House members have vowed to object to electoral votes cast for Democratic nominee Joe Biden in battleground states in an attempt to trigger a contingent election. In that scenario, each state’s delegation in the U.S. House of Representatives casts one en bloc vote to determine the president, while the vice president is decided by a vote in the U.S. Senate.

But before a contingent election is called, an objection must succeed. Objections during the joint session must be made in writing by at least one House member and one senator. If the objection meets the requirements, the joint session pauses and each house withdraws to its own chamber to debate the question for a maximum of two hours. The House and the Senate then vote separately to accept or reject the objection, which requires a majority vote from both chambers.

If one chamber accepts and the other rejects, then according to federal law, “the votes of the electors whose appointment shall have been certified by the executive of the State, under the seal thereof, shall be counted.”

Rep. Mo Brooks (R-Ala.) initiated the push when he announced his intention to object to the electoral votes come January. Since then, a growing number of Republican lawmakers have expressed their intention to object to the electoral votes during that session, including Reps. Matt Gaetz (R-Fla.), Jody Hice (R-Ga.), Lance Gooden (R-Texas), Brian Babin (R-Texas), Ted Budd (R-N.C.), and Andy Biggs (R-Ariz.), and Rep.-elect Madison Cawthorn (R-N.C.).

So far, there have been no senators who have publicly committed to challenging a state’s results, but Sen.-elect Tommy Tuberville (R-Ala) has suggested that he may join the planned objection by House members. Some Republican senators, including majority leader Sen. Mitch McConnell (R-Ky.), have made it clear that they would like to avoid such a floor fight, and may attempt to persuade Tuberville from joining.

“Ultimately, every senator will have to make their own decision about that, but I think there will be people, yeah, reaching out him just to kind of find out” what Tuberville may consider doing, Senate Republican Whip John Thune (S.D.) told The Hill.

“I’m hoping in the end that all senators will conclude that this election needs to be over with and it’s time to move on,” Thune added.

Earlier on Dec. 26, Trump expressed his disappointment over McConnell and his own party for their lack of support, even though election disputes haven’t been completely resolved.

“If a Democrat Presidential Candidate had an Election Rigged & Stolen, with proof of such acts at a level never seen before, the Democrat Senators would consider it an act of war, and fight to the death. Mitch & the Republicans do NOTHING, just want to let it pass. NO FIGHT!” he wrote on Twitter.

Trump and his campaign are racing against the clock to seek a determination from the courts over a slew of evidence they say raises questions over whether the 2020 election was stained by fraud as well as last-minute unconstitutional rule changes in the form of health- and safety-related voting measures due to the pandemic. If successful, the president is seeking to invalidate ballots and allow state legislatures to decide which Electoral College votes should be counted on Jan. 6.