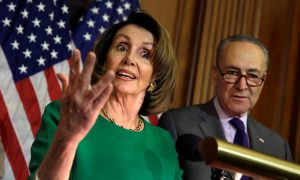 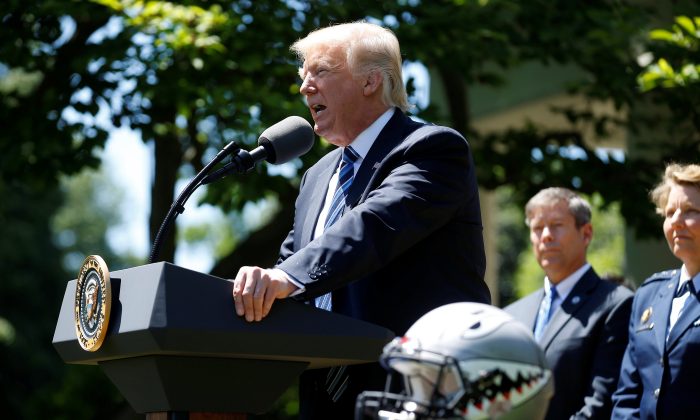 President Donald Trump speaks as he presents the U.S. Air Force Academy football team with the Commander-in-Chief trophy in the Rose Garden of the White House in Washington on May 2, 2017. (REUTERS/Joshua Roberts)
US

WASHINGTON—President Donald Trump endorsed a government shutdown later this year in a post on Twitter on Tuesday that also urged Republicans to consider changing Senate rules to make it easier to pass spending and other bills without any Democratic support.

“Our country needs a good ‘shutdown’ in September to fix mess!” he wrote.

either elect more Republican Senators in 2018 or change the rules now to 51%. Our country needs a good “shutdown” in September to fix mess!

Trump also backed the so-called “nuclear option” for legislation but added that the party could strengthen its hand by winning more Senate seats in the 2018 congressional election.

Democrats—and some Republicans—quickly denounced his call to close the federal government in a spending fight just as both parties were closing in on a final measure to fund agencies through September.

“Here we saw Democrats and Republicans working together in the best traditions of the Senate, and the president disparages it in a way that’s destructive,” Democratic Senate Leader Chuck Schumer said.

Senator John Cornyn of Texas, the No. 2 Republican in the Senate, told reporters: “I just don’t agree.”

Trump said his fellow Republicans had to acquiesce to Democratic demands in a government spending bill negotiated this week because the party’s majority was too slim to win the 60 Senate votes that would have been needed if Democrats had chosen to block the legislation with a filibuster.

“The reason for the plan negotiated between the Republicans and Democrats is that we need 60 votes in the Senate which are not there! We either elect more Republican Senators in 2018 or change the rules now to 51%,” Trump wrote on Twitter

Both parties signed off on the spending bill to fund the federal government through September to avert a government shutdown, with Republicans and Democrats both claiming some political victories.

Despite Trump’s tweets suggesting he would be willing to let the government funding lapse later this year in an effort to pressure Democrats to agree to more of his budget priorities, top Republicans have touted this week’s budget deal.

“After years of partisan bickering and gridlock, this bill is a clear win for the American people,” Trump himself said later on Tuesday at a White House event.

Republicans last forced a government closure in 2013 for 17 days. Democrats said Trump would shoulder the blame for any shutdown now.

Democratic Senator Patrick Leahy called Trump’s threat “a sour and shameful note to kick off negotiations” for next year’s spending plan, pointing to billions of dollars of losses triggered by the shutdown four years ago.

In the House, also led by Republicans, Speaker Paul Ryan took a more muted response. “We’ve got a long ways to go between now and September,” he told reporters.

Some conservatives applauded Trump’s call for ending the supermajority needed in the Senate to pass major legislation. Representative Trent Franks, pointing to the compromise spending bill moving to the House and Senate floors this week, said Democrats have a “choke hold” on bills despite being in the minority.

Senate leaders have already allowed the “nuclear option” to ease through judicial and executive-branch nominees with a simple majority of 51 votes.

But Cornyn, speaking to reporters, said using it to muscle through legislation without a consensus could lead to “really bad policy” on a number of issues: “It’s a real mistake.”