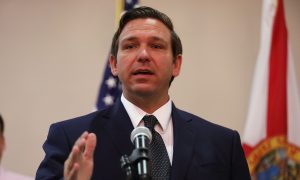 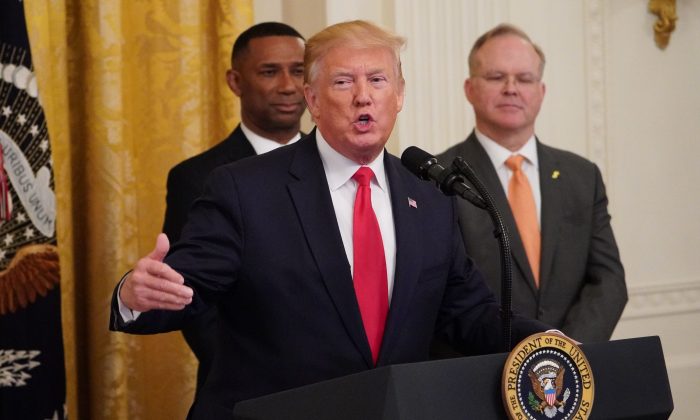 President Donald Trump underscored Florida Governor Ron DeSantis’s decision to ban sanctuary cities in the state, commenting that other governors and leaders do not have the courage to do the same.

Trump wrote the tweet on June 16 after the bill, which requires local law enforcement to cooperate with federal immigration authorities, was passed on June 14.

….More and more states want to do this but their governors and leaders don’t have the courage to do so. The politics will soon mandate, however, because people from California, & all over the land, are demanding that Sanctuary Cities be GONE. No illegals, Drugs or Trafficking!

Sanctuary cities shield illegal immigrants from deportation by prohibiting state law enforcement from cooperating with federal agencies like Immigration and Customs Enforcement (ICE). If an illegal alien is arrested or convicted of a crime and ICE requests custody of them, sanctuary policies prevent law enforcement from honoring the request.

DeSantis was quoted in a press release saying that the law is about “public safety, not about politics.”

“Sanctuary cities basically create law-free zones where people can come to our state illegally and our country illegally, commit criminal offenses and then just walk right out the door and continue to do it,” said the governor, according to The Associated Press.

Earlier this year, I made a promise that we would ban sanctuary cities in Florida and today we are delivering on that promise. I am proud to sign the bill presented to me by the FL Legislature to uphold the rule of law and ensure that our communities are safe. pic.twitter.com/xKQDOPRBHx

While New York City Mayor Bill DeBlasio has championed the city’s sanctuary status, the policy has led to serious problems.

In February an MS-13 gang member allegedly shot a man multiple times, killing him in broad daylight on a subway platform. It was later revealed that Ramiro Gutierrez was in the country illegally.

Caught: Police say the have a known MS 13 gang member in custody for the shooting death of a man after a dispute on a Manhattan bound 7 train.

Gutierrez was arrested in December, 2018, on felony conspiracy charges, after which he was released on $2,500 bail, according to the New York Post. Lawyers and federal agents said that the Department of Corrections knew that he was an illegal immigrant, yet they did not contact ICE, nor was his immigration status made available while he was detained.

In another example, ICE arrested over 200 people during Operation Keep Safe in New York for violating immigration laws, stated ICE in a press release.

Over 60 of those arrested had been previously released by local authorities after ICE had requested custody of them. Among those captured, many were convicted of felonious offenses, such as child sex crimes, assault, and weapons charges.

“The fact is that a so-called ‘sanctuary city’ does not only provide refuge to those who are here against immigration law, but also provides protections for criminal aliens who prey on the people in their own communities by committing crimes at all level,” said Thomas R. Decker, an official for ICE, in the release.