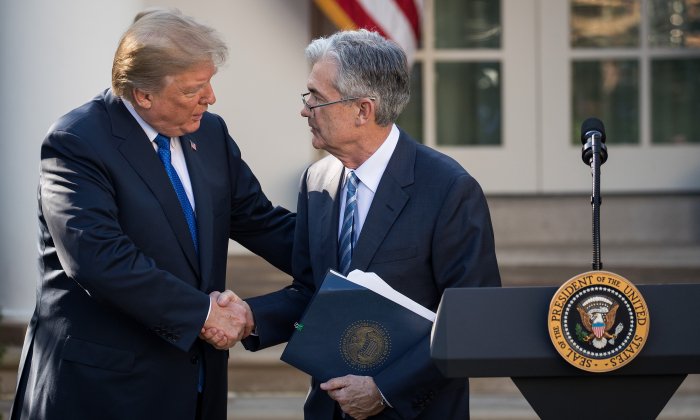 President Donald Trump shakes hands with his nominee for Federal Reserve chairman, Jerome Powell, during a press event in the Rose Garden at The White House in Washington, on Nov. 2, 2017. (Drew Angerer/Getty Images)
Trump Presidency

Trump Turns Up Pressure on Federal Reserve Ahead of Rate Decision

The president cited the strong U.S. dollar, steady inflation rate, and slowing growth in China as key factors the central bank considers in determining the course of national monetary policy.

“It is incredible that with a very strong dollar and virtually no inflation, the outside world blowing up around us, Paris is burning and China way down, the Fed is even considering yet another interest rate hike. Take the victory!” Trump wrote on Twitter.

After maintaining interest rates at a historic low throughout most of the Obama administration, the Fed has increased the federal funds rate eight times since late 2015 to 2.25 percent from virtually zero. The Fed has indicated it intends to continue gradually raising rates toward a neutral setting. Similar cycles of rate increases previously have resulted in stock-market crashes or economic recessions.

Analysts expect the U.S. central bank will raise rates at the end of its two-day policy meeting on Dec. 19.

The president began criticizing Powell, his appointee, in July after three quarter-point rate increases in a row.

“China, the European Union and others have been manipulating their currencies and interest rates lower, while the United States is raising rates while the dollars gets stronger and stronger with each passing day—taking away our big competitive edge,” Trump said in a Twitter post on July 20.

The president’s reference to tightening points to another change that the Fed embarked on towards the end of the Obama administration. Instead of buying up assets under the quantitative easing strategy, which added liquidity to the market place, the Fed began selling assets—or quantitative tightening.

Impacts of the tightening cycle were temporarily offset by central banks around the world that were still following an easing cycle, but the global course reversed on Oct. 1, according to Stanley Druckenmiller, a former investor and hedge-fund manager.

“This is a time for choosing. We believe the U.S. economy can sustain strong performance next year, but it can ill afford a major policy error, either from the Fed or the rest of the administration,” Druckenmiller said in a Dec. 17 op-ed published by The Wall Street Journal. “Given recent economic and market developments, the Fed should cease—for now—its double-barreled blitz of higher interest rates and tighter liquidity.”

Congress mandates the Fed, a private entity, with steering U.S. monetary policy to pursue full employment and stable prices. Some economic indicators—including U.S. economic growth and employment—are healthy and tilt the scales towards a rate increase. Meanwhile, other key measures, like steady inflation, a declining stock market, and slowing global trade growth, point toward holding back a rate hike.

Trump’s rhetoric has grown increasingly sharp since July. In Oct., the president told Fox Business Network the central bank is the biggest threat to his presidency. In November, he told The Washington Post the Fed is a bigger problem than China.