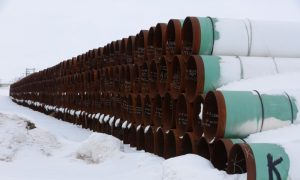 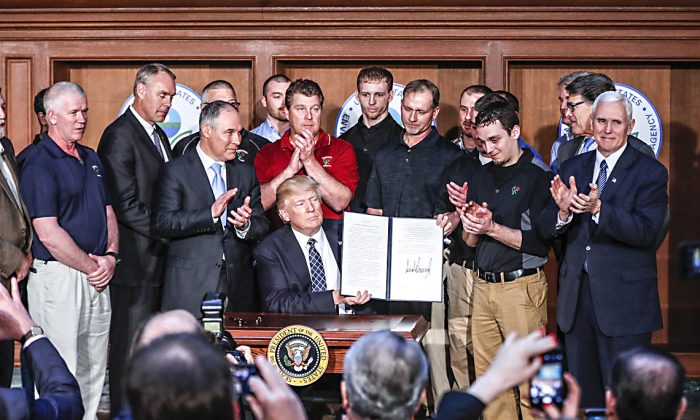 In an executive order, President Donald Trump rolled back a number of regulations that required reductions in greenhouse gas emissions. While its immediate impact will be limited, the move reduces the federal regulatory burden on industries—notably coal, oil, and gas mining.

The March 28 order directs federal agencies to no longer consider greenhouse emissions when permitting energy, infrastructure, and other projects and stops the agencies from factoring the “social cost of carbon” into their decisions.

More nimble approval processes for projects may prompt more investment in oil production, according to oil analyst Bobby Tudor. “It might pull production forward a little quicker,” Tudor said, during a March 27 podcast from the Columbia University Center on Global Energy Policy.

Another part of the order starts the process of removing President Barack Obama’s Clean Power Plan, which required states to slash carbon emissions from power plants by 32 percent below 2005 levels, by 2030.

Yet the plan was never implemented, as coal-friendly states challenged it in court. Still, it may take years to dismantle the plan under federal procedures.

Some 85 percent of U.S. states are on track to meet the emissions targets, despite the fact that the plan has not been implemented, according to Bill Becker, director of the National Association of Clean Air Agencies.

I cannot tell you how many jobs the executive order is going to create, but I can tell you that it provides confidence in this administration’s commitment to the coal industry.
— Tyler White, president, Kentucky Coal Association

Trump’s order also lifts the Bureau of Land Management’s temporary ban on leasing federal land for coal mining. The ban was put in place by Obama in 2016 as part of a review to study the program’s climate impact and ensure royalty revenues were fair to taxpayers.

The coal industry took Trump’s move as a positive sign.

“I cannot tell you how many jobs the executive order is going to create, but I can tell you that it provides confidence in this administration’s commitment to the coal industry,” Kentucky Coal Association president Tyler White told Reuters.

But the decline in coal mining is largely due to competition from cheap natural gas, calling into question any significant rebound in the coal industry.

Trump also reversed Obama’s more stringent rules on methane leakage from oil and gas facilities. The rules aimed at limiting emissions of methane as a greenhouse gas would have prevented less than 0.2 percent of the greenhouse gas releases and were expected to cost the industry over half a billion dollars in 2025.

Many scientists have said greenhouse gasses, such as carbon dioxide released by burning fossil fuels, have a negative impact on our planet’s climate. There is debate, however, on the significance of the impact.

Trump’s order may encourage companies to care less about the amount of greenhouse gasses they produce, though the impact will be limited by regulations imposed by individual states.

Placing less emphasis on carbon emissions reductions complicates the nation’s efforts to meet its commitments under the 2015 Paris climate accord. The U.S. pledged to push carbon emissions to about 27 percent below the 2005 level by 2025. Trump said during his election campaign that he will pull the country out of the Paris agreement.