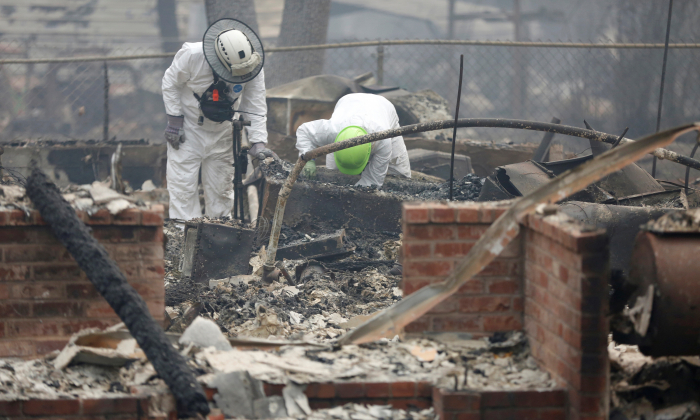 An anthropologist (R) examines the remains of a dog found in a bathtub in a home destroyed by the Camp Fire in Paradise, California, on Nov. 14, 2018. (Terray Sylvester/Reuters)
Trump Administration

PARADISE, Calif.–The search for victims of the deadliest wildfire in California history expanded on Nov. 15, as the White House said that President Donald Trump would visit the area on Nov. 17.

Crews were working through the town of Paradise a week after it was incinerated, as 56 people were confirmed dead in Northern California’s Camp Fire.

More than 9,000 personnel from many U.S. states are fighting that blaze, as well as the Woolsey Fire hundreds of miles to the south.

Authorities attributed the high number of casualties to the staggering speed with which the wind-driven flames incinerated Paradise. Nearly 8,700 homes were destroyed and 15,500 buildings threatened, according to the California Department of Forestry and Fire Protection (Cal Fire).

The White House said Trump would meet with people displaced by the fires.

National Guard troops are in Paradise, a town of about 27,000 in the Sierra foothills about 175 miles north of San Francisco, looking for remains of victims. One hundred thirty people, most over the age of 65, were still listed as missing.

Authorities fear that in the crush to flee the fast-approaching flames, some elderly residents may have been left behind. At least 22 cadaver dogs are part of the search.

Those who survived the flames but lost their homes were adapting to a refugee lifestyle and many found a haven at a still-open Walmart in Paradise. A section of the store’s parking lot was roped off for use as a distribution center for clothes, food, and coffee, while people who fled their homes set up dozens of tents in an adjacent field or slept in their cars in the parking lot. Portable toilets were brought in.

Evacuees milling in the parking lot faced morning temperatures that dropped into the mid-30s and many wore breathing masks for protection from lingering smoke.

Nicole and Eric Montague, along with their 16-year-old daughter, went to the Walmart parking lot for free food but have been living with extended family in Chico, about 12 miles away, in a one-bedroom apartment filled with 15 people and nine dogs.

‘We Didn’t Have Any Time’

They said they were aware a fire was coming toward Paradise last week but were stunned by how quickly it arrived.

“We didn’t have any time to react,” Eric said. “The news didn’t even know the fire was coming. It just happened so quick.”

Nicole said she decided to flee once her home’s mailbox caught fire and neighbors’ propane tanks began exploding. With approaching flames and immovable traffic, her evacuation with her daughter was so harrowing that she called Eric to say they were going to die.

Paradise’s ghostly expanse of empty lots covered in ash and strewn with twisted wreckage and debris made a strong impression on Gov. Jerry Brown, Interior Secretary Ryan Zinke, and other officials who toured the devastation on Nov. 14 and were due to visit the scene of the Woolsey Fire on Nov. 15.

The Butte County disaster coincided with blazes in Southern California, including the Woolsey Fire, which has killed at least two people, destroyed more than 500 structures and at its height displaced 200,000 people west of Los Angeles.

The Camp Fire also stands as one of the deadliest U.S. wildfires since the 19th century. More than 80 people perished in the Big Burn firestorm that swept the northern Rockies in August 1910, consuming 3 million acres.