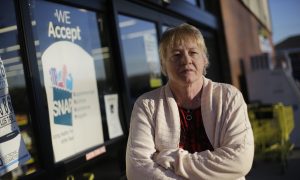 President Donald Trump has instructed the Agriculture Department to tighten rules for states where able-bodied adults are allowed to collect food stamps when not working or training for a job.

The proposed rule comes after Congress dropped expanded food stamps work requirements that Trump wanted to have included in the 2018 Farm Bill.

Nearly 38.6 million Americans collected food stamps, officially called the Supplemental Nutrition Assistance Program (SNAP), in September (pdf). The new rule, however, would only pertain to some 3.8 million of the recipients between the ages of 18 and 49 with no dependents and no disabilities. These recipients would be more likely to face work requirements.

SNAP requires these able-bodied adults to work or train for a job at least 20 hours a week if they want to collect the benefits for more than three months of a three-year period.

States may request to waive the three-month limit in areas with an unemployment rate above 10 percent or where there are “not sufficient jobs.”

Yet despite the unemployment rate being at its lowest point since 1969—at 3.7 percent in November—nearly half of the able-bodied adults on SNAP live in areas that have the work requirement waived.

This suggests, the administration argues, that rules for the waivers are too lax and states thus don’t encourage SNAP recipients enough to find jobs.

“Long-term reliance on government assistance has never been part of the American dream,” said Agriculture Secretary Sonny Perdue in a Dec. 20 release. “As we make benefits available to those who truly need them, we must also encourage participants to take proactive steps toward self-sufficiency. Moving people to work is common-sense policy, particularly at a time when the unemployment rate is at a generational low.”

The proposed rules would tighten the criteria for waivers, including cutting out more prosperous regions from the waived areas, limiting the waivers’ duration to one year, and only allowing local area waivers where the unemployment rate exceeds 7 percent. Currently, a local area can be considered to have “not sufficient jobs” with an unemployment rate as low as 5 percent.

With the new rules, only 11 percent of the able-bodied adults would live in waived areas, the department estimated.

The new rules are “intended to move more able-bodied recipients … to self-sufficiency through the dignity of work,” the department stated, adding that helping people to bounce back was the original intent of SNAP.

“Americans are generous people who believe it is their responsibility to help their fellow citizens when they encounter a difficult stretch,” Perdue said. “That is the commitment behind SNAP. But like other federal welfare programs, it was never intended to be a way of life.”

The proposed rule (pdf) will be open to public comment for 60 days after being published in the Federal Register.

More than four million people have left SNAP since Trump took office, marking an economic boom pushed along by Trump’s tax and regulation cuts, as well as his push for companies to stop moving jobs abroad and invest in America instead.

While the job market has cooled in November, the country still had over 7 million job openings in October with only about 6 million people considered unemployed, meaning those who had sought a job in the previous four weeks.

Trump sought to tighten the SNAP work requirements further, expanding the work requirements to all able-bodied adults up to the age of 59. Currently, the three-month limitation only applies to able-bodied 18- to 49-year-olds without dependents. For everybody else, they don’t need to work as long as they register to work, take a job if offered, or participate in job training if assigned by the state. If they do work, they’re not allowed to voluntarily quit or reduce their work hours.

The expanded requirements, however, perished during Congress negotiations as Republican lawmakers made concessions to get enough votes to pass the bill in the Senate, where they hold a tight 51–49 majority.

The average SNAP benefit is about $150 a month. With administrative expenses added in, the program cost more than $68 billion in 2017.

An October report by the Government Accountability Institute (GAI) stated that SNAP administrators have “hidden systemic fraud and allowed large-scale waste and abuse to go unabated for years.”

While the government reported a mere 1.5 percent fraud rate in the program, the real rate ranged from 20–30 percent, some two dozen federal and state SNAP fraud investigators told the conservative think tank, according to GAI President Peter Schweizer.

In the biggest fraud bust of SNAP’s history, 12 store owners were indicted in 2017 in Florida for siphoning $20 million from the program.

While “pinning down a definitive total is difficult,” the total loss to various forms of SNAP fraud goes “well into the billions,” Schweizer told The Epoch Times in October.