Trump Threatens Harsh Sanctions on Iraq If US Troops Forced Out 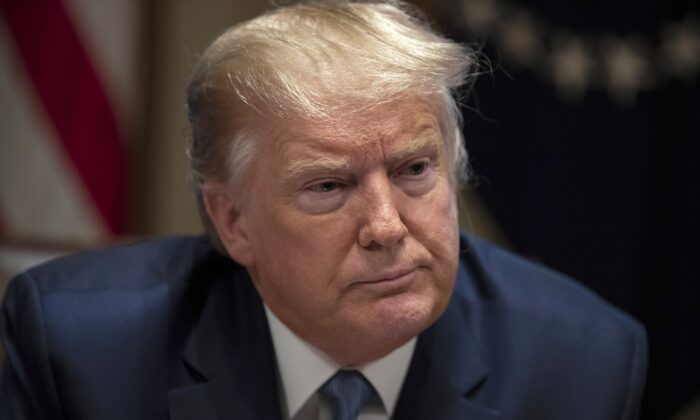 President Donald Trump listens during a roundtable with governors on government regulations in the Cabinet Room of the White House in Washington on Dec. 16, 2019. (Evan Vucci/AP Photo)
By Katabella Roberts

President Donald Trump has threatened harsh sanctions against Iraq on Jan. 5 if U.S. troops are expelled from the country, according to White House media pool reports.

Speaking to reporters on Air Force One, the president said that if troops were made to leave, Baghdad would have have to pay Washington for the cost of the air base the United States funded there and the country would face strict sanctions.

“If they do ask us to leave, if we don’t do it in a very friendly basis, we will charge them sanctions like they’ve never seen before, ever. It’ll make Iranian sanctions look somewhat tame,” he said.

“We have a very extraordinarily expensive air base that’s there. It cost billions of dollars to build. Long before my time. We’re not leaving unless they pay us back for it.”

The president’s warning comes after the Iraqi parliament voted in support of a resolution to ban foreign forces from using Iraqi land, water, and airspace for any reason in a move to expel U.S. troops and their allies from the country.

Lawmakers backing the non-binding resolution asked the government to end a 2014 agreement with Washington to station an estimated 5,200 troops in Iraq to help in the fight against ISIS. They act mainly as advisors.

“The government commits to revoke its request for assistance from the international coalition fighting ‘Islamic State’ due to the end of military operations in Iraq and the achievement of victory,” the resolution read.

“The Iraqi government must work to end the presence of any foreign troops on Iraqi soil and prohibit them from using its land, airspace, or water for any reason.”

Iran-backed militia groups also fought alongside the United States during Iraq’s war against ISIS that lasted between 2014 and 2017, during which time they were formally integrated into Iraq’s armed forces.

The Iraqi Parliament’s resolution follows the death of Soleimani on Jan. 3, who was killed in a U.S. airstrike in Baghdad’s international green zone. Nine others were killed, including Abu Mahdi al-Muhandis who the United States designated a terrorist. In 2007, a Kuwaiti court sentenced him to death in absentia for his involvement in the 1983 U.S. and French embassy bombings in Kuwait.

Before the attack, the U.S. intelligence community said it had reason to believe that Soleimani was involved in “late stage” planning to strike Americans in multiple countries, including Iraq, Syria, and Lebanon to draw the United States into military action and take attention away from the mass protests in Iraq against Iran’s growing influence in the country.

Secretary of State Mike Pompeo has defended the U.S. military’s presence in Iraq following the passing of the resolution.

“As for the activity today with respect to Iraq, we’ve been in their country, we’ve been supporting Iraqi sovereignty, we’ve been continuing to take down the terrorist threat against the Iraqi people,” Pompeo told Fox News Sunday.

“We are confident that the Iraqi people want the United States to continue to be there to fight the counterterror campaign, and we’ll continue to do all the things we need to do to keep America safe,” he added.

Last week, Pompeo also defended the airstrike that killed Soleimani, saying that it disrupted an “imminent attack” that would have endangered American lives.

“I think any reasonable person who saw the intelligence that the senior American leaders had in their possession would have come to the same conclusion that President Trump and our leadership team did about the fact that there would have been more risk to America—more risk through inaction than there was through the action that we took,” he said.

Tensions have been running high in Iraq since anti-government protests erupted in October 2019, as thousands of people, mostly young, demand an overhaul of the political system and condemn the influence of the Iranian regime on local politics and militia groups.

Iranian-backed militias are accused of killing more than 500 people. At the height of the unrest in November, protesters threw firebombs at the Iranian consulate in Najaf.

A further 17,000 have been injured since the protests began, according to the BBC.

In response to the demonstrations, Iraq’s prime minister Adel Abdul Mahdi resigned, but has remained in office in a caretaker capacity as the country elects a new prime minister.

The recent death of Soleimani, who had visible political power in Iraq, may now influence the future path of Iraq, Sam Bazzi, a Middle East analyst and the founder of the Islamic Counterterrorism Institute and Hezbollah Watch told The Epoch Times.

“Soleimani ran the pro-Tehran politicians in Iraq. He had carried a lot of political weight and influence among the Iranian regime’s regional proxies and political allies,” he said.

Soleimani was often seen holding talks with politicians in Baghdad to promote the formation of an Iraqi cabinet that would have Iran’s approval.