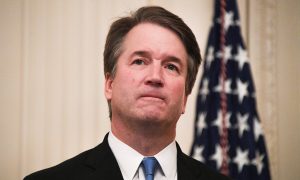 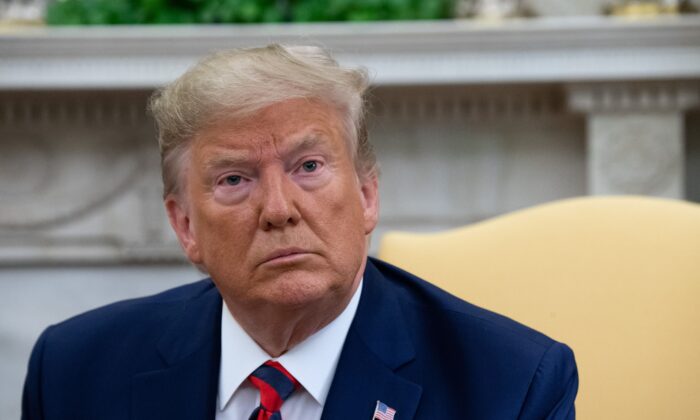 Trump: ‘The Press Has Had a Very Bad Week With All of the Mistakes Made at the New York Times and Other Places’

President Donald Trump criticized the media on Sept. 20 for its reporting on Supreme Court Justice Brett Kavanaugh, singling out the New York Times after the paper issued a major correction and two reporters later made false claims while promoting a book about Kavanaugh.

Trump was speaking to reporters in the White House when he lambasted them.

“When you look at what they did to Justice Kavanaugh and so many other things last week, I think this is one of the worst weeks in the history of the fake news media. You have been wrong on so many things,” he added later. “The media of our country is laughed at all over the world now. You’re a joke.”

Trump was referring to how reporters have blown up a vague allegation by a so-called whistleblower accusing the president of promising something to a foreign government.

Amid reports that the government was Ukraine, Trump lawyer Rudy Giuliani, the former New York City mayor, told The Hill that the State Department asked him to meet with Andrei Yermak, an attorney and adviser for Ukranian President Volodymyr Zelensky.

“They actually urged me to talk to him because they said he seemed like an honest broker,” Giuliani said. “I reported back to them [two officials with the State Department] what my conversations with Yermak were about. All of this was done at the request of the State Department.”

Citing interviews with more than 12 officials in Ukraine and the United States, Hill reporter John Solomon said that former Ukranian President Petro Poroshenko and now Zelensky have been trying since the summer of 2018 to give evidence to the Trump administration that may show Americans were in violation of U.S. law during the administration of President Barack Obama.

Ukranian officials said the efforts were stymied by the U.S. embassy in Kyiv and ignored by the U.S. Attorney’s Office in New York. The U.S. attorney, who is now retired, confirmed to The Hill that they received evidence that appears to show the Democratic National Committee pressuring Ukraine to interfere in the 2016 presidential election in the United States.

The meeting between Guliani and Yermak means that the allegations the media have been focusing on have lacked significant context—Trump and Zelensky, the Ukrainian president, were discussing information already exchanged by their lawyers.

Guliani took to Twitter late Thursday to write that a president telling a president-elect “of a well known corrupt country he better investigate corruption that affects [the] US is doing his job.”

“Maybe if Obama did that the Biden Family wouldn’t have bilked millions from Ukraine and billions from China; being covered up by a Corrupt Media,” he added.

During an appearance on CNN that day, Giuliani stated: “I found out this incredible story about Joe Biden, that he bribed the president of the Ukraine in order to fire a prosecutor who was investigating his son.” He said he “asked the Ukraine to investigate the allegations that there was interference in the election of 2016 by the Ukrainians for the benefit of Hillary Clinton.”

He also acknowledged he asked Ukraine to look into Biden.

In the Oval Office on Friday, Trump told reporters that their slant was going to be proven wrong again, as they have been on a number of issues, principally the alleged Trump-Russia collusion.

“This is another one. So keep playing it up, because you’re going to look really bad when it falls. You know, I guess I’m about—I guess I’m about 22 and 0, and I’ll keep it that way,” he said. “Keep asking questions and build it up as big as possible so you can have a bigger downfall.”

The president also suggested media outlets wouldn’t investigate a statement Biden made 2018 about how events transpired in 2016 involving a probe that had been opened into Burisma, where Hunter  Biden served on the board and was paid up to $83,000 a month.

“I looked at them and said: I’m leaving in six hours. If the prosecutor is not fired, you’re not getting the money. Well, son of a [expletive]. He got fired,” Biden said. The prosecutor in charge of the probe was fired in March 2016.