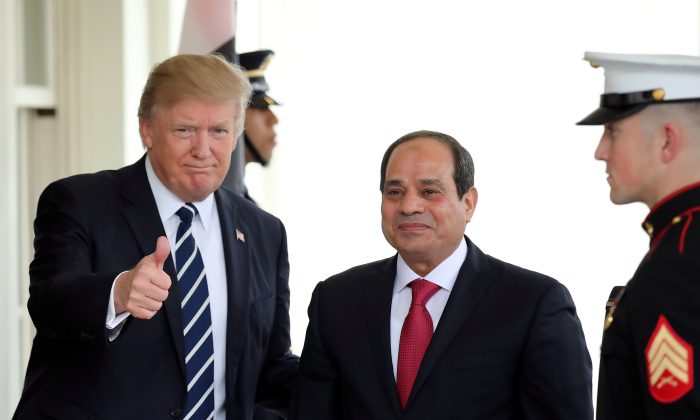 Obama froze aid to Egypt for two years after Sisi, then a general, overthrew President Mohamed Mursi in mid-2013 after mass protests against Mursi’s rule. Mursi, a Muslim Brotherhood member, had been elected the previous year.

The one-on-one meeting between Trump and Sisi, followed by a separate gathering with top aides, showed how intent the new U.S. president is on rebooting the bilateral relationship and building on the strong connection the two presidents established when they first met in New York last September.

“I just want to say to you, Mr President, that you have a great friend and ally in the United States, and in me,” Trump said.

Sisi said he appreciated that Trump has been “standing very strong … to counter this evil ideology.”

Rights groups have called for the release of Aya Hijazi, an Egyptian-American who works with street children and was arrested in May 2014 on human trafficking charges.

Hijazi has been held in custody for 33 months in violation of Egyptian law, which states that the maximum period for pretrial detention is 24 months.

A senior administration official said the subject of Hijazi did not come up in the meeting with Trump, Sisi and their advisers but said the detention is an issue of concern and a case that is being watched closely by the Trump administration.

Egypt has long been one of Washington’s closest allies in the Middle East, receiving $1.3 billion in U.S. military aid annually. It is fighting an Islamist insurgency in Sinai in which hundreds of Egyptian soldiers and police have been killed.

A U.S. official said Sisi would find a White House ready to soften U.S. criticism of Egypt on human rights and to work on counter-terrorism but unwilling to provide additional aid to the most populous Arab nation.

“He’s going to get an end to finger-wagging. We’re not giving him any more money,” said the U.S. official, who spoke on condition of anonymity before Sisi’s meetings with Trump.

“He’s going to be disappointed because he wants more assistance and he’s not going to get it,” the official added, saying it was not yet clear whether Egypt would escape a cut in its foreign aid as part of the Trump administration’s plan to cut the overall State Department budget by 28.7 percent.