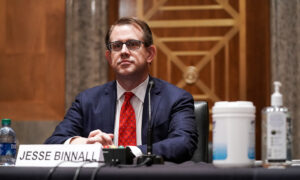 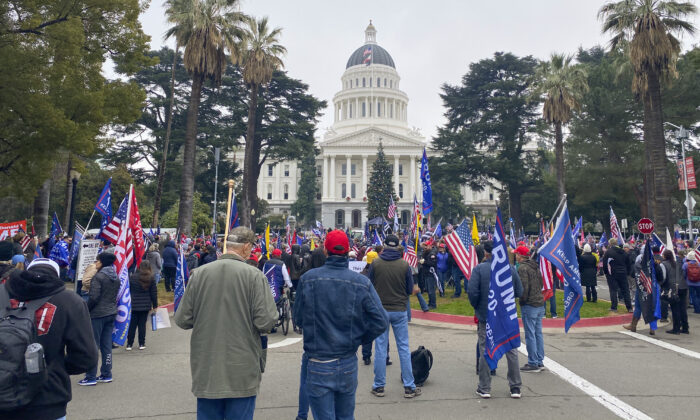 Rally-goers gathered in front of the California State Capitol as well as the Nevada State Capitol on Jan. 6 to support President Donald Trump and call for election integrity.

The rallies took place on the same day that Congress convened to count electoral votes in the nation’s capital.

In Sacramento, attendees who had traveled from different parts of California shared their comments with Epoch Times reporters.

Peter Kuo, who is originally from Taiwan, is currently vice chairman of the California Republican Party. He was at the Sacramento rally.

“What I’m seeing right here in our government, especially here in California, it’s exactly the same as Taiwan 38 years ago where the government [was] just changing the rules as they go,” Kuo told The Epoch Times.

“There’s no democracy, there’s no freedom, there’s no liberty anymore. We have to take it back,” he said.

Kuo believes that a lack of faith is a contributing factor to today’s outcome.

“America is founded by people of faith,” he said. “If you throw that faith out the window, this is what we see today. It’s a faithless society.”

Michael Grover Coltharp, who is running for governor of California, told The Epoch Times:

Jean Llewellyn, vice president of the Westlake Village Republican Women Federated, told The Epoch Times: “The baton has to be passed to legislators to take a stand to step forward and start legislating to prevent these things from happening. Everything from voter ID, term limits, to legislation for the next pandemic.”

Llewellyn said that far extreme activists are a distraction to America.

“Those noises—those voices are the loudest, and they’re preventing us from hearing the middle voice, which actually is where America lives,” she said.

Chris Cartolano, a Sacramento resident, told The Epoch Times, “Election fraud should concern everyone, whether you’re a Democrat or Republican.”

He enjoyed being at the rally with supporters of the same cause.

“And you can see a lot of diversity here, and that’s the thing that they’re suppressing. They think that we’re all conservatives—white. That’s not true. Just look around,” Cartolano said.

“People who are patriotic will not concede to the populace, but will stand up [and] make calls to Congress,” Tate said.

Karen Wetterlind, a rally attendee from Westlake Village, expressed her patriotism for the United States.

“It’s why everybody wants to immigrate here. It’s what gives us our freedom to live our lives and to be prosperous, and it’s all being taken away by people who are lying and cheating,” Wetterlind told The Epoch Times.

“Today is a monumental day in our history,” Jeannette, a rally attendee from Santa Clarita, told The Epoch Times. “Just hope that Congress does the right thing.”

Supporters in Nevada were energetic as they waited for updates on the joint session of Congress in Washington D.C.

The event in Nevada was participant-led and was called “Operation Occupy the Capitol.” There were hundreds in attendance.

“Either we keep the republic, or we lose it to communist influences. And I don’t want that for my kids and grandkids,” Dawn Rickabaugh told The Epoch Times.

Dozens of similar events were held throughout the nation in parallel with the “Save America” rally in Washington D.C.

President Trump said that he will “never concede,” during a speech addressed to supporters in D.C. on Jan. 6.

With reporting by Ilene Eng, Nancy Han, and Andy Ellsmore.