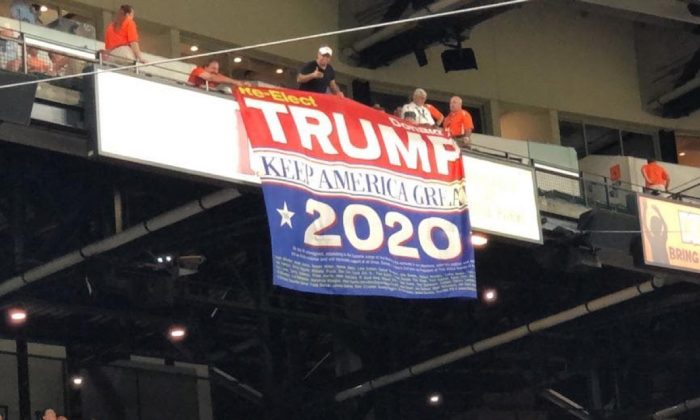 Dion Cini, a military veteran and an avid Trump supporter from New York, told The Epoch Times that he and four of his friends organized the banner drop because it was the first Baltimore Orioles home game since President Donald Trump called out Rep. Elijah Cummings (D-My.) over poor living conditions in Baltimore. Trump was responding to Cummings’s criticisms of the conditions at southern border facilities.

A self-described conservative, Cini and his friends have been receiving media attention for similar stunts in recent months—they were even banned from California’s Disneyland in February for unfurling a “Trump 2020” flag on a riverboat at the amusement park.

“I did it so that once again Trump 2020 will go viral in media headlines,” Cini said. “But I knew this one in particular, especially during play that Trump 2020 would be front and center. So mission successful.”

The Baltimore Orioles lost to the Toronto Blue Jays 11-2, with near-empty stands for most of the game, according to Cini.

“That was probably the lowest attendance I’ve ever seen [for] that baseball game though,” he said.

Cini told The Epoch Times that the flag drops he has been organizing “are not done at random.”

“I always say, my answer is always the same thing. When the entertainers and the sports players stop bashing Trump, I’ll stop dropping my flags.”

The reaction from the fans, staff, and police to the stunt at Camden Yards was mixed but positive overall, Cini said. Ushers were the first to approach the group to tell them to take down the flag but Cini said they politely said no.

It was a whole nine minutes before the flag came down.

Police had arrived to ask them to take down the flag and discuss the situation.

“They just said ‘What do you guys want to do?’ and we said we’ll leave,” Cini said.

“Nine minutes is a very long time to keep up a flag like that. The media makes it sound like we had to take it down so quickly. But nine minutes is almost an eternity when it comes to doing these types of things like flying Trump flags.”

Cini said not only did the police officers not ask them to leave, but they escorted them out of the park and all the way to their vehicle to ensure that they were safe.

“The cops were the best part about it,” Cini said. “As you can see in the video, the cop let me keep it up for about four or five minutes. He could have easily asked me to take it down immediately but did not.”

Cini said that some people booed and chanted to take it down, but not everyone was against it.

Cini said he got thanked on the way out and got the thumbs up from some of fans.

“There were also a lot of people that were for the banner but they keep a lower profile,” Cini said. “Because they’re afraid of getting hurt by the people that are booing.”

Cini said this was the best of his flag drops yet and that it was most likely longer than all of the other flag drops combined.

“The staff of Baltimore were great,” he said. “The police were amazing, helpful. They weren’t encouraging, but they were very helpful and made sure that we got out of there safely.”