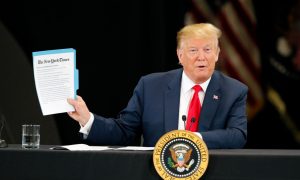 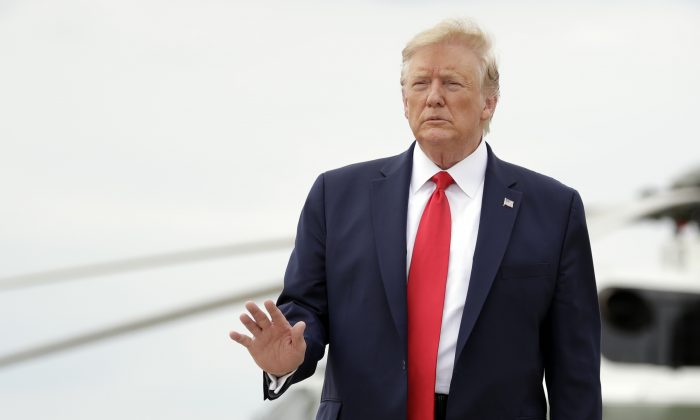 President Donald Trump indicated he wouldn’t debate his primary challengers, dismissing their attempts to defeat him as “a publicity stunt.”

Trump, speaking to reporters in Washington before he left for North Carolina to tour Hurricane Dorian-damaged areas and give a speech at one of his rallies, noted that polls show all of his challengers “at less than one percent.”

“I guess it’s a publicity stunt,” he said in response to a question about whether he’d debate the challengers. “To be honest, I’m not looking to give them any credibility. They have no credibility.”

Trump has criticized all three men, reacting on Monday after Sanford announced his entry in the race.

“When the former Governor of the Great State of South Carolina, @MarkSanford, was reported missing, only to then say he was away hiking on the Appalachian Trail, then was found in Argentina with his Flaming Dancer friend, it sounded like his political career was over. It was, but then he ran for Congress and won, only to lose his re-elect [sic] after I Tweeted my endorsement, on Election Day, for his opponent,” Trump said on Twitter.

“But now take heart, he is back, and running for President of the United States. The Three Stooges, all badly failed candidates, will give it a go!”

Trump told reporters at the gaggle that the three men are “a joke, a total joke,” calling them “a laughingstock.”

In a move familiar to both parties, some states have canceled their primaries, including Arizona, South Carolina, and Kansas. Trump said that the states don’t want to waste money on “very expensive” primaries.”

“The four states that canceled it don’t want to waste their money. If there was a race, they would certainly want to do that, but they are considered to be a laughingstock,” Trump said.

He said he had nothing to do with the canceled primaries.

Walsh on Saturday criticized the decision by the executive committee of South Carolina’s GOP to skip the 2020 primary, saying “it’s [expletive] un-American.”

“It’s undemocratic. It’s wrong. It’s what they do in places like Russia and China. Not here. Denying Americans the right to vote in order to protect Donald Trump? Outrageous,” he added.

Weld chipped in on Sunday, writing on Twitter: “Canceled primaries? What are you afraid of, Mr. No-Show? Intelligent, experienced, honest and decent competitors? Now more than ever, @realDonaldTrump, you can run but you cannot hide.”

Canceled primaries? What are you afraid of, Mr. No-Show? Intelligent, experienced, honest and decent competitors? Now more than ever, @realDonaldTrump, you can run but you cannot hide. #LetTheGamesBegin

But polls consistently show Trump with strong approval within the Republican party, some showing approval as high as 91 percent.

A USA Today/Suffolk University survey in late August, for example, showed 90 percent of respondents saying they would vote for Trump, with only 5 percent indicating support for Weld. An Emerson Polling survey around the same time showed Trump with 84 percent support, compared to 16 percent for Weld.

The polls were conducted before Walsh and Sanford entered the race and no polls have been conducted since then.

Sanford announced his entry on Sunday, writing that Trump “has ruled out action on the very things that drive spending and accumulated debt” and that “debate is even being canceled on the Republican side, though I believe we need a conversation and action more than ever given our present course.” [delete after edit]

“Essentially no one ‘leading’ in Washington is leading, or even speaking of, our financial predicament. We are living in a government spending and financial la-la land. Which brings me to the larger question of what I, or any of us, can do about it?” he added. “I have a unique vantage point and set of experiences—as a Governor, as a Member of Congress and as a taxpayer outside of politics. I do believe we must have this conversation now and humbly I step forward.”