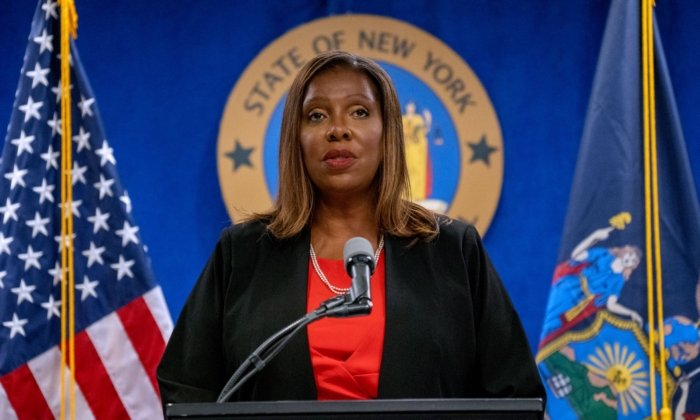 The lawsuit (pdf), filed in federal court for the northern district of New York, seeks an order for James to cease or limit her office’s investigations into Trump.

“For years, she has flagrantly abused her investigatory powers to target her political adversaries and advance her career,” the complaint states. “Her relentless attacks on Donald J. Trump serve as a prime example. Since taking office, she has tirelessly bombarded him, his family, and his business, Trump Organization LLC, with unwarranted subpoenas in a bitter crusade to ‘take on’ the President.”

The attorney general’s office responded to the lawsuit saying that Trump was using it to attack and delay the office’s inquiries into the business dealings of the Trump Organization.

“To be clear, neither Mr. Trump nor the Trump Organization get to dictate if and where they will answer for their actions,” James said in a statement. “Our investigation will continue undeterred because no one is above the law, not even someone with the name Trump.”

In a separate statement issued on Monday, Trump said his lawsuit “is not about delay” and that James’ investigation “is just a continuation of the political Witch Hunt that has gone on against me by the Radical Left Democrats for years.”

Trump’s lawsuit details a list of instances in which James expressed bias and animus against Trump, commencing with comments she made not long after his inauguration in 2017. The cited statements include James’ proclamation that “we are all being killed by this (Trump) administration.”

Ten months into Trump’s term, James said, “I’ve been leading the resistance against Donald Trump in NYC and will only continue to do so in every way possible,” the lawsuit points out.

Trump has previously filed a similar challenge against New York City District Attorney Cyrus Vance Jr., who is conducting a separate investigation into Trump’s business. That challenge percolated all the way to the Supreme Court, which rejected Trump’s application in February this year.