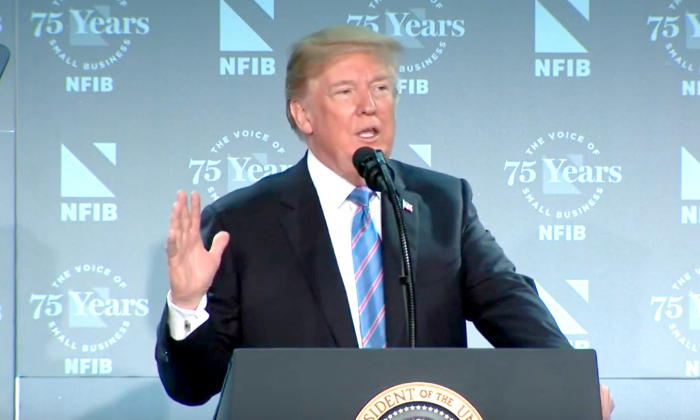 On June 19, President Donald Trump delivered a speech at the 75th anniversary of the National Federation of Independent Business (NFIB) in which he celebrated entrepreneurship and small businesses.

Trump praised the achievements of the small-business sector throughout the history of the United States and said that he is “100 percent” behind them.

“For many years, Washington tried to hold you back and tear you down, crushing the American small business with crippling taxes and oppressive regulation,” he said to the audience of businesspeople. “The Trump administration is with you, and we are with you 100 percent. And always will be.”

The president also spoke about a range of other topics, including illegal immigration, the North American Free Trade Agreement, tax cuts, border security, and health care.

In May, the NFIB’s Small Business Optimism Index reached its second-highest level in its 45-year history. The index rose by three points to reach 107.8, with small businesses reporting high numbers in several major areas, including compensation, profits, and sales trends.

On the topic of illegal immigration, Trump went into specifics on the family separation policy. He said that “crippling loopholes” caused the issue and that the government only has two policy options to respond to the crisis.

“We can either release all illegal immigrant families and minors who show up at the border from Central America, or we can arrest the adults for the federal crime of illegal entry. Those are the only two options,” he said.

“They’ve learned the loopholes in this horrible, rotten system that the Democrats have to help us fix,” he said. “These smugglers know these rules and regulations better than the people that drew them.”

The tax reform bill signed into law last year offers a deduction of 20 percent of income for pass-through entities such as S corporations and LLCs. Under the old tax code, pass-throughs were taxed at 39.6 percent. In addition, under the new code, businesses can immediately deduct the full cost of their investments in new equipment.