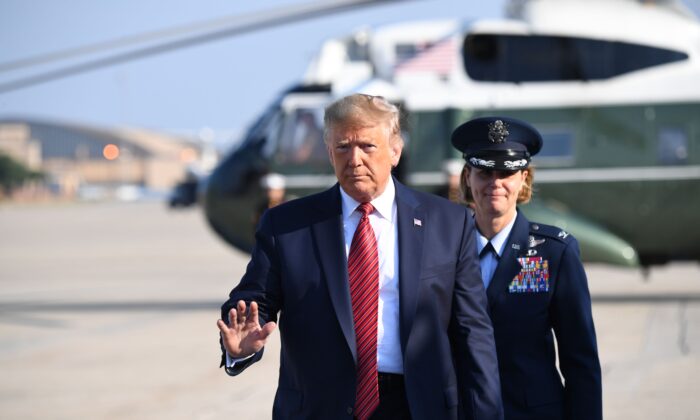 President Donald Trump boards Air Force One prior to departing from Joint Base Andrews in Maryland on Sept. 22, 2019. (SAUL LOEB/AFP/Getty Images)
By Zachary Stieber

President Donald Trump has criticized Rep. Adam Schiff (D-Calif.) for “making up stories” during a congressional hearing, after Schiff, while appearing to read from the transcript of a phone call between Trump and Ukrainian President Volodymyr Zelensky, added words for dramatic effect.

Schiff, who is chairman of the House Intelligence Committee, later claimed that what he did during the panel’s hearing with acting Director of National Intelligence Joseph Maguire was part of a “parody” of what Trump had said.

Speaking to reporters just before 1 p.m. on Sept. 26, Trump told them: “I just watched a little bit of this on television. It’s a disgrace to our country. It’s another witch hunt. Here we go again.

“It’s Adam Schiff and his crew making up stories and sitting there like pious whatever you want to call them. It’s just a—really, it’s a disgrace.”

According to a pool reporter, a broadcast of Schiff’s comments were played on television during the Air Force One flight.

“It’s a terrible thing for our country. They can’t do any work. They’re frozen—the Democrats. They’re going to lose the election; they know it. That’s why they’re doing it. And it should never be allowed, what’s happened to this president,” Trump added, referring to the furor surrounding his July call with Zelensky.

“He doesn’t talk about Joe Biden firing a prosecutor, and if that prosecutor is not fired, he’s not going to give him money from the United States of America. They don’t talk about that.”

Democratic presidential candidate Joe Biden, the former vice president, pressured the Ukrainian government to fire a prosecutor while Biden was still in office. Hunter Biden, Biden’s son, was working for a company that the prosecutor was probing at the time.

Trump noted that Zelensky told reporters at the United Nations on Sept. 25 that “nobody pushed [Zelensky]” and said the impeachment inquiry into him “shouldn’t be allowed.”

“There should be a way of stopping it. Maybe legally through the courts,” Trump said.

A transcript of the phone call was released by the White House to the public on Sept. 25 and a complaint from a person who heard that Trump was allegedly acting improperly as president was released by Schiff on Sept. 26.

After Schiff added words to the transcript, Republicans said that he was misleading the public.

“While the chairman was speaking, I had someone text me, ‘Is he just making this up?’” Rep. Michael Turner (R-Ohio), a member of Schiff’s committee, said during the hearing.

“And yes, yes, he was. Because sometimes fiction is better than the actual words or the text. But luckily, the American public are smart and they have the transcript. They’ve read the conversation, they know when someone’s just making it up.”

After Turner’s remarks, Schiff told those assembled: “My colleague is right … it’s not OK. But also my summary of the president’s call was meant to be, at least part, in parody. The fact that that’s not clear is a separate problem in and of itself. Of course, the president never said, ‘If you don’t understand me I’m going to say it seven more times.’ My point is that that was the message that the Ukrainian president was receiving in not so many words.”