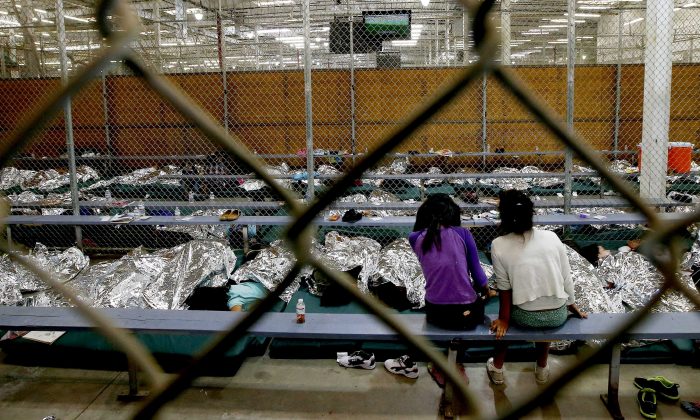 President Donald Trump criticized his predecessor, former President Barack Obama, over how illegal alien children were treated during his time in office.

“OBAMA KEPT THEM IN CAGES, WRAPPED THEM IN FOIL,” Trump wrote on Twitter on June 23, quoting a Drudge Report headline that referred to a set of photographs taken at a migrant holding facility in 2014. The photographs show dozens of children sleeping on the floor in cages, including some in which the children are wrapped in foil blankets.

Drudge Report “OBAMA KEPT THEM IN CAGES, WRAPPED THEM IN FOIL” We do a much better job while at the same time maintaining a MUCH stronger Border! Mainstream Fake Media hates this story.

“We do a much better job while at the same time maintaining a MUCH stronger Border!” Trump wrote. “Mainstream Fake Media hates this story.”

Trump sent the message three days after signing an executive order on June 20 to address the issue of separating illegal alien families on the border.

Among other instructions, the order directed Attorney General Jeff Sessions to file a request to modify the Clinton-era Flores Settlement Agreement, the enforcement of which is causing the family separations. Sessions filed the request on June 21.

The article Trump referenced described the U.S. Customs and Border Protection Nogales Placement Center in Arizona during an immigration crisis in 2014, when more than 40,000 children from South and Central America came into the United States illegally.

This wasn’t the first time Trump referenced the photos. On May 29, when major media outlets began to promote the family-separation narrative, Trump pointed to a gaffe several prominent media figures committed by sharing the 2014 photos and suggesting that they were the result of Trump administration policies.

“Democrats mistakenly tweet 2014 pictures from Obama’s term showing children from the Border in steel cages,” Trump wrote at the time. “They thought it was recent pictures in order to make us look bad, but backfires.”