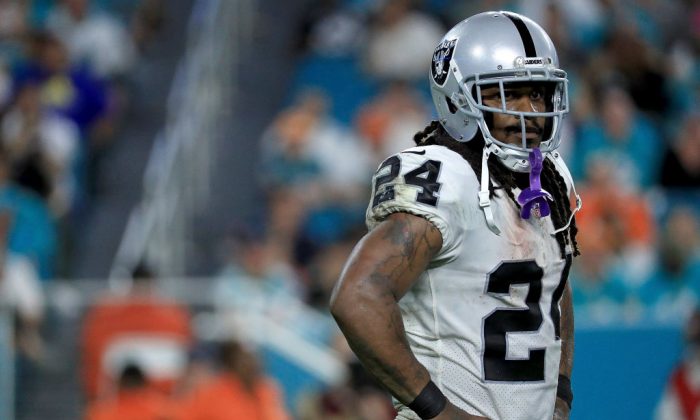 Marshawn Lynch No. 24 of the Oakland Raiders looks on during a game against the Miami Dolphins at Hard Rock Stadium on Nov. 5, 2017, in Miami Gardens, Fla. (Mike Ehrmann/Getty Images)
US News

Trump Slams Marshawn Lynch for Standing Only for Mexican Anthem

On Monday, President Donald Trump criticized an NFL player who sat down for the U.S. national anthem—but stood for the Mexican anthem.

Running back Marshawn Lynch from the Oakland Raiders sat during most of the “Star-Spangled Banner” at Sunday’s, Nov. 19, game against the New England Patriots at Azteca Stadium in Mexico City. He stood instead for the Mexican anthem.

Trump said that the league should consider a harsher penalty for Lynch’s actions.

“Marshawn Lynch of the NFL’s Oakland Raiders stands for the Mexican Anthem and sits down to boos for our National Anthem. Great disrespect!” he said in a Nov. 20 tweet. “Next time NFL should suspend him for remainder of season. Attendance and ratings way down.”

An NFL writer for the Boston Globe, Ben Volin, posted a photo of Lynch’s protest. Volin also noted that it is the “first time I’ve seen Lynch stand for the Mexican anthem,” according to a Nov. 19 tweet.

According to the New York Post, Lynch has not stood for the national anthem at all—since he returned from retirement to join the Raiders this season.

Trump has been silent on the NFL’s national anthem protests in the past few weeks. He previously has slammed players who knelt for disrespecting the military.

Marshawn Lynch sits during the US national anthem, stands for Mexican anyhem pic.twitter.com/8wdaKprEki

Former San Francisco 49ers quarterback Colin Kaepernick started the controversy last year by first sitting then kneeling during the national anthem. He told NFL.com last year he’s “not going to stand up to show pride in a flag for a country that oppresses black people and people of color.”

Many critics have said that protesting during the anthem is disrespectful to the country, especially to members of the military. Some have also said that NFL games are neither the venue nor the time to protest, as football has generally, until recently, been a place where the public can put aside their political views.